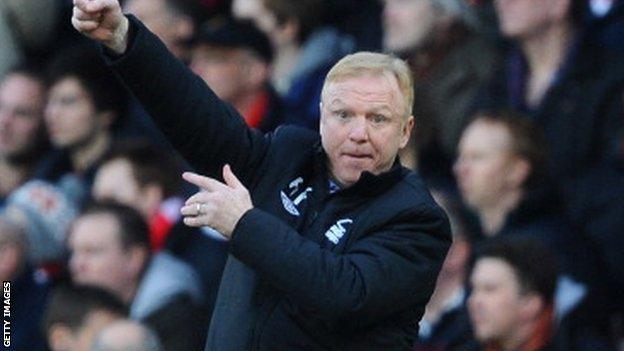 Burke curled a glorious left-foot effort off the underside of the bar from the edge of the area on half-time.

He added another on 79 minutes after substitute Nathan Redmond beat two men to set up a simple tap-in.

Forest's Billy Sharp scored a consolation penalty in stoppage time after Curtis Davies had tripped him.

The visitors had started the game brightly, Chris Cohen playing a one-two with Sharp before firing straight at Jack Butland, now on loan with Blues after being sold to Stoke on transfer deadline day.

At the other end, Karl Darlow had to push away a loose ball at his near post after Davies's header had caused panic in the Forest defence.

Sharp sent a header just past the far post for the visitors from an Andy Reid cross, while Butland reacted quickly to punch clear Greg Halford's header.

But it was home winger Burke, whom Forest had sought to sign in the January transfer window, who broke the deadlock, curling the ball in via the crossbar from 18 yards.

Halford squandered another wonderful chance for Forest early in the second half when he nodded over unmarked from seven yards.

And 10 minutes from time, Blues sealed it, Redmond skipping past two defenders before squaring for Burke to tap in his second, before Sharpe added a consolation from the spot.

For the hosts, victory brings the breathing space of a six-point gap to the relegation zone, while defeat at a tempestuous St Andrew's completes an eventful few days for Forest boss McLeish.

On Friday, Forest chairman Fawaz Al Hasawi said his relationship with his manager was cordial despite McLeish reportedly considering his position at the club after Peterborough's George Boyd's move to the City Ground collapsed.

"I just wish we could have got that elusive clean sheet. I was disappointed we didn't win by a bigger margin with the chances we had particularly in the second half.

"I am enjoying it at the moment because we have a lot of pace in the team when we break.

"Chris Burke is back to his form of last season when he was the best player in the Championship.

"In the last seven or eight games he has been fantastic and I am glad we turned down what wasn't the biggest of bids for him from Nottingham Forest."

"When you lose goals like we did against Birmingham it is pretty tough to watch.

"There is not a lot I can control about that, as the players have to take real responsibility and make sure they do not concede silly goals as they did against Birmingham.

"It was pretty unprofessional to concede a goal with only 45 seconds to go in the first half."