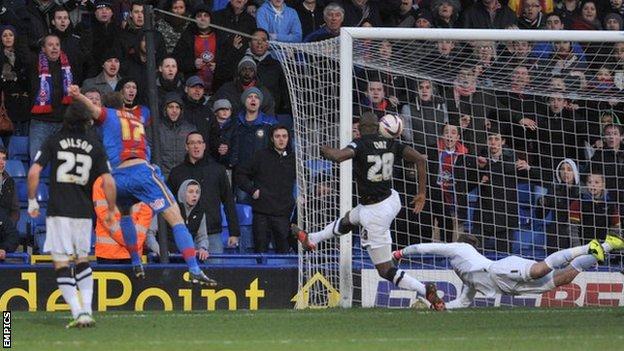 A Glenn Murray double saw off feisty London rivals Charlton and put Crystal Palace back in the promotion hunt.

Charlton dominated the first half but there was just a single goal from Ricardo Fuller, who slotted home a low drive against his former club.

Palace came to life after the break but had to wait until the 75th minute for Murray to tuck in Dean Moxey's pass.

When Charlton failed to clear Stephen Dobbie's cross, Murray picked up a pass from Jazz Richards to pounce again.

The former Palace man had a golden chance when Palace keeper Julian Speroni palmed the ball onto his head but Cort nodded over the bar.

After the break, Zaha drove an early effort off target and Stuart O'Keefe headed Zaha's cross wide as Palace put Charlton under pressure before Murray finally broke through.

"It's all about getting this momentum again. We need to regain it because we've lost it a bit, and then who knows?

"I would say that in the first half and even the first hour, it was some of the best stuff we've played.

"But of course, you need to take your chances when they come and we needed to take more than the one we got because we knew there would be a response from Palace.

"It was a proper local derby with chances at both ends. It's just a body blow we didn't come out on top."