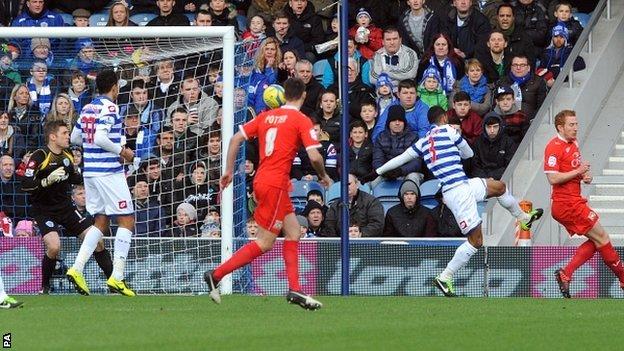 The R's boss made nine changes to the side that drew 1-1 in the Premier League with West Ham last weekend.

But he was concerned that the team, which included seven internationals, did not take their chance to shine.

"Surely they're entitled to beat a team from two divisions down? It tells me I need to improve the squad," he said.

"That is why I have gone all over Europe these last three weeks trying to improve the squad because we are short."

Queens Park Rangers have not progressed beyond the fourth round of the FA Cup since the 1996-97 season when they lost 2-1 at Wimbledon in the fifth round.

The west Londoners, who are bottom of the Premier League and five points adrift of safety, went 4-0 down before scoring two late goals against Karl Robinson's side, who are eighth in League One.

It was in contrast to a decent run of form since the start of 2013 where they have chalked up a five-game unbeaten run.

With Manchester City next up for QPR on Tuesday, Redknapp chose to make nine changes but believed the only reason that backfired is because his players failed to perform.

He said: "If you look at the team today, what is it? An England goalkeeper [Rob Green], a right-back from Manchester United [Fabio], a left-back in Armand Traore.

Redknapp, who has already brought in striker Loic Remy and defender Ben Haim during the transfer window, suggested some players could be moving out with a deal for Chunnam Dragons' South Korean international Yun Suk-young close to being completed

"I gave them a chance today because they knock on my door and say they should be playing and other people tell me they are all good players," the former Tottenham boss said.

"Well, they got their chance today and they blew it. It answers questions - not for me because I already knew the answer, but for other people. Today they saw the answers."