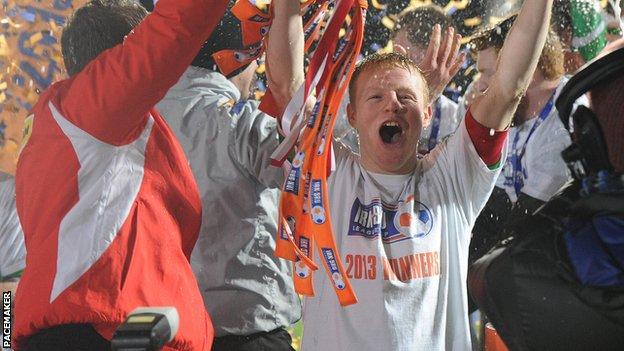 Cliftonville are nine points clear in the Premiership and also have the Irish and Setanta Cups to aim for.

"If we stick together, this team can be something special," said McMullan.

"This is a great bunch of lads. We owed ourselves this performance in a cup final because some had questioned our ability to get over the line."

Cliftonville manager Tommy Breslin said he had not been surprised by the strong start made by Crusaders.

"They are a good side and were bound to have a good spell," added Breslin whose team have won 16 and lost just one of their last 19 matches.

"But once we had weathered that, we produced a marvellous performance.

"The first goal was vital, and once we got it, the confidence grew and the sending-off ended it a wee bit as a contest.

"However, the 10 men of Crusaders worked their socks off."

Crusaders boss Stephen Baxter was magnanimous after such a disappointing defeat.

"When you lose 4-0 to your nearest rivals, it is tough," said Baxter.

"But Cliftonville gave us a footballing lesson in the second half. They kept the ball well, looked dangerous and scored good goals.

"It might have been different if we had taken two of the four chances we had in the opening 10 minutes."