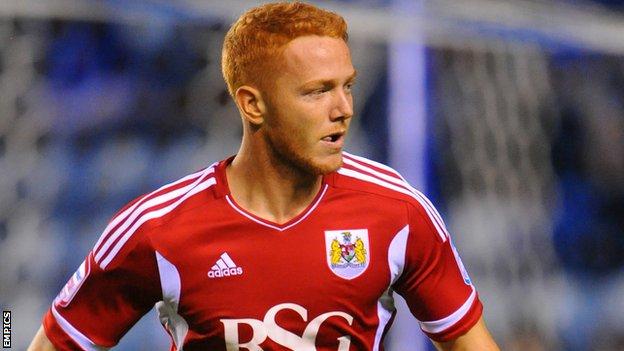 Bristol City striker Ryan Taylor will be out for at least six weeks after breaking his collarbone.

The 24-year-old was taken off after 16 minutes in their 2-1 victory over Ipswich on Saturday.

"We've got a copy of the X-ray and it's a clean break," head coach Sean O'Driscoll told BBC Radio Bristol.

"We're not sure if he needs a plate putting in - we'll decide that in the next couple of days. If that happens then his season's over."

O'Driscoll continued: "We were joking that [Olympics cyclist] Bradley Wiggins broke his collarbone and got back on his bike to win the Tour de France.

"But it's a blow to us. Luckily Sam Baldock is back to full fitness and we had Jon [Stead] on the bench."

Taylor has made 23 appearances for Bristol City this season, but has scored only once.

O'Driscoll says he may now add a new striker to his squad, as they look to escape the Championship relegation zone.

"It's something we'll look at now to bolster the numbers," he added.