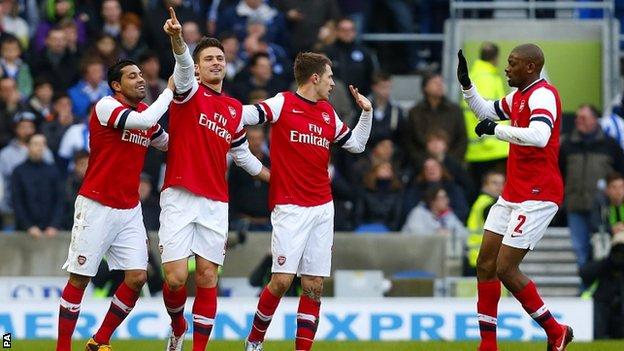 Arsenal manager Arsene Wenger admitted resting players for the FA Cup fourth round win at Brighton was a gamble that could have backfired.

He gives us presence in the box, he is dangerous and his physical presence was very important today

Wenger left Theo Walcott, Jack Wilshere and Santi Cazorla out of his starting line-up at The Amex Stadium.

And it needed Walcott's introduction as a second-half substitute to settle a thrilling game with a deflected late goal that gave Arsenal a 3-2 win as they go in search of their first trophy in eight years.

Wenger said: "Of course this is the gamble you take and it can backfire. You have to rotate because of the number of games you play and you know if it doesn't work you will be accused of making the wrong decision."

Arsenal led twice through Olivier Giroud but Brighton battled back to level through Ashley Barnes and debutant Leonardo Ulloa before Walcott sent the Gunners into the fifth round.

Wenger added: "We didn't play Jack Wilshere just to protect his ankle a bit but you can't play the same 11 every week. We have got a game against Liverpool on Wednesday then we play Stoke."

He was delighted with the performance of summer-signing Giroud, whose two goals made it four in a week, saying: "It is very important for his confidence. He gives us presence in the box, he is dangerous and his physical presence was important today.

Wenger insisted he is not close to making any signings ahead of Thursday's transfer deadline. He said: "Quality-wise we don't need strikers but in numbers we could be a bit short. I don't find strikers who can play for Arsenal in the street.

"I can't promise we will sign anybody. I'm not close to doing it."

Brighton boss Gus Poyet praised his side and admitted the performance of Giroud had caused problems they had not been able to fully solve.

He said: "Giroud was outstanding, powerful and technically better than us. It was very difficult for us to handle him.

"I thought we competed very well and were in the game all the time. We had a great chance to do something special but we lost Gordon Greer and Will Buckley to injury and that meant we had a big problem."