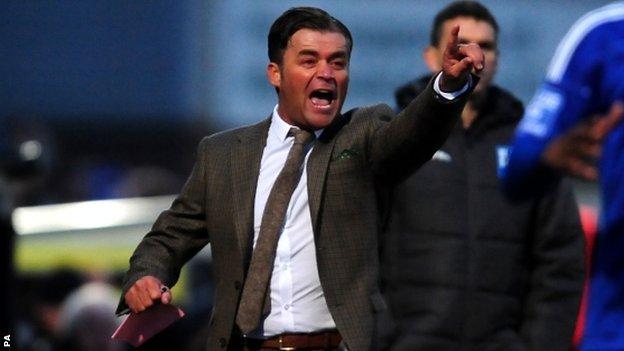 Macclesfield boss Steve King was left frustrated after his side's remarkable FA Cup run was ended by a Wigan side he described as "there for the taking".

The Latics survived sustained pressure from their Blue Square Bet Premier opponents to reach the fifth round thanks to an early Jordi Gomez penalty.

We were playing a side with millions of pounds of talent in their team, and we more than held our own

King said: "I do feel disappointed. We dominated the whole game and we should have had a penalty in the first half.

"Waide Fairhurst was pushed in the back and I can't believe it wasn't given."

King approached referee Roger East at half-time to ask for an explanation of why his side were denied a spot-kick, but says he was not given an adequate one.

"His explanation was that it wasn't a penalty because he didn't give it," King added. "I thought that was quite arrogant of him really.

"I watched the incident again on the TV monitors at half-time and, as he came back out for the second half, I asked him to take a look at it. He wouldn't.

"I told him that, when he does see it, to ring me to apologise. There were two big decisions in the game and he got one right and the other one wrong.

"Theirs was a penalty - yes, no problem. But ours was a stonewall penalty too. Wade was about to backheel it to Matthew Barnes-Homer, who is in on goal. That is a massive decision to get wrong because, if we score the penalty, anything can happen.

King says he got sympathy from the Wigan coaching staff after the game, who told him it was a similar situation to when they play bigger teams in the Premier League team and decisions don't go their way.

"They were very complimentary all round," King said. "They said they couldn't get out of their half particularly after half-time.

"We were playing a side with millions of pounds of talent in their team, and we more than held our own."

The defeat ended a stirring cup run for the Silkmen, who had already knocked out Championship leaders Cardiff and League One high-flyers Swindon on their way to reaching the fourth-round for the first time in the club's 139-year history.

Now King wants them to take their form back into the league as they look to win back the Football League place they lost last season.

Macclesfield are 10th in the Blue Square Bet Premier table, five points off a play-off place.

King added: "I have said to the boys that there is no point serving up the kind of displays we have put on in the cup and then losing to teams at the bottom of the table.

"If we don't make the play-offs with the group of players we have, then we have under-achieved."