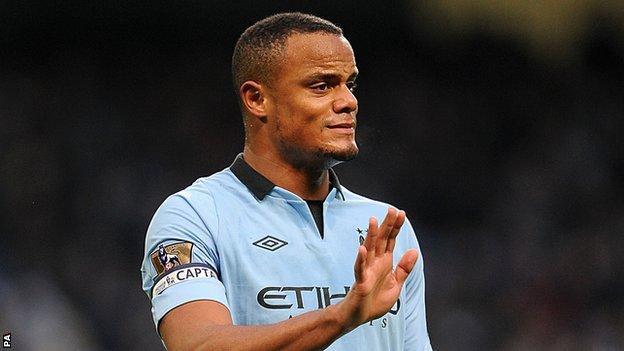 Kompany, 26, is definitely out of Tuesday's match at Loftus Road and may not play against Liverpool next Sunday.

Kompany on his calf injury

"On to the next round and a fifth consecutive clean sheet! I hope I won't be out for too long but the team seems to be strong as ever."

"It's too early to say how long he will be out but he will miss the midweek game," coach David Platt said.

The defender tweeted: "I hope I won't be out for too long but the team seems to be [as] strong as ever."

Kompany was forced off just after the half hour mark at the Britannia Stadium after he stumbled while controlling the ball. City will only know the full extent of their captain's injury when he is assessed by medical staff on Sunday morning.

His absence exacerbates a problem for the Premier League champions as they are already without fellow centre-back Kolo Toure who is away at the Africa Cup of Nations.

If Toure's hotly-tipped Ivory Coast side reach the final, the 31-year-old will be missing until at least 10 February.