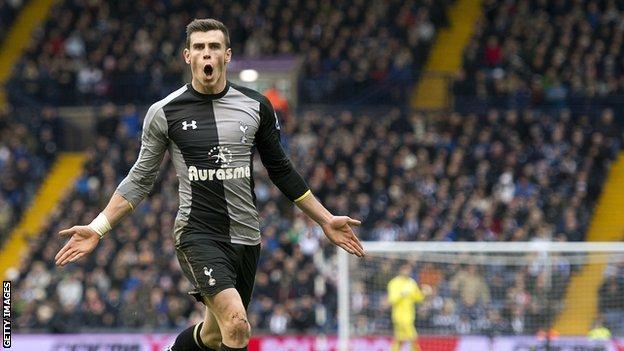 Gareth Bale's stunning strike ensured Tottenham moved to within a point of third-placed Chelsea with a patient victory over 10-man West Brom.

A drab first period in which Bale went close and Shane Long missed two decent chances for the hosts sparked into life two minutes after the break when Goran Popov was sent off for spitting.

Spurs took full advantage of the extra man and began to dominate possession.

Gareth Bale has now scored nine Premier League goals away from home this season. Only Robin van Persie (10) has more.

Bale put them ahead with a 20-yard shot and they held on to win with ease.

The Baggies barely threatened in the closing stages and the blame lay at the feet of Popov for his bizarre reaction to a mundane challenge from Kyle Walker.

Until Popov's red card for spitting at the England defender West Brom had created the better chances, but their hopes of avoiding a fifth defeat in their last six games all but ended with his departure.

West Brom, without wantaway striker Peter Odemwingie, had two good early chances and the imposing figure of Romelu Lukaku was at the heart of both. First the on-loan Chelsea striker easily won a high ball to send strike partner Shane Long through on goal only for the Republic of Ireland international to hopelessly over-run the pass.

Lukaku, whose combination of brute strength and speed seemed to unnerve the visitors' defence, then got a decent shot on target from the left.

But their best opening saw Long's low strike well blocked by the on-rushing Hugo Lloris in the Spurs goal after an exquisite outside-of-the-foot pass from Graham Dorrans.

Unsurprisingly, Spurs' main threat in a flat first half came from the pace and direct running of Bale and Aaron Lennon.

A fine burst from Lennon on the left teed up a great opportunity for Clint Dempsey at the far post but the striker headed wide from six yards.

But it was Bale, operating centrally, who looked the most likely source of an away goal. Twice the Welshman glided down the right and delivered dangerous balls into the box and he was closest to opening the scoring when his delightful 20-yard left-foot curler forced a fine fingertip save from Ben Foster deep into first half-injury time.

West Brom are beaten again - their fifth defeat in six games - but they made it very tough for themselves. They had the better chances before the break but Spurs got on top when Goran Popov was sent off for spitting. It was deeply unpleasant and cost his side the game.

However Tottenham's lack of a Lukaku-type focal point and their inability to get numbers into the box meant the Baggies looked relatively comfortable.

The away side's menace diminished further when Jermain Defoe limped off before the break with what appeared to be a badly twisted left ankle. That was a huge blow to manager Andre Villas-Boas, already deprived of the services of Emmanuel Adebayor who is on on Africa Cup of Nations duty.

Defoe's replacement Lewis Holtby looked busy and tidy but, having failed to sign a striker in the transfer window, the last thing Villas-Boas needed was an injury up front.

The game turned in Tottenham's favour, however, a minute after the break when Popov's moment of madness.

Referee Mark Clattenburg immediately waved the red card at the defender and Spurs coasted to victory against their demoralised hosts.

Lukaku was taken off as the Baggies reorganised and Spurs took full advantage of the extra man and began to completely dominate possession.

Holtby's fizzing near-post shot forced Foster into action and Bale nearly got in on goal but was thwarted by a clattering but fair Foster challenge.

But they were rewarded for their patience on 66 minutes.

Spurs retained possession on the right and the ball was worked to Bale who skipped away from James Morrison and unleashed a fine 18-yard strike that beat Foster for pace and stretched his side's unbeaten Premier League run to nine games.