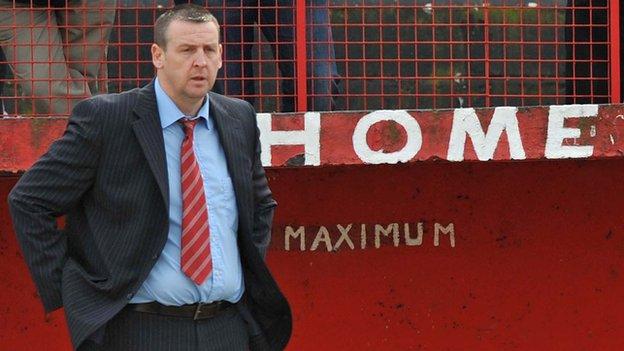 Manager Graham McConnell is urging his players to grasp a big Irish Cup opportunity when they take on Lurgan Celtic in Tuesday's fifth round replay.

If the Inver Park men can get past Celtic, they would then face another Championship Two side Knockbreda Parish with a quarter-final place at stake.

"When the draw for the next round has already been made, you cannot help but look ahead," said McConnell.

"We might never have a better chance of getting to the quarter-finals."

Larne, who lost their top flight status in 2008, had been struggling in Championship One earlier in the season and that led to McConnell returning for his second spell as boss, replacing the dismissed Tommy Kincaid.

They have been unbeaten in their last five league matches but suffered a 4-0 defeat at home to Limavady United in the Intermediate Cup on Saturday.

Larne forced the replay against Lurgan Celtic thanks to Gary Workman's late goal direct from a corner.

"It would be an injustice if we had lost that game because I feel we are the better side," added McConnell.

"We were happy to get another go and now it is up to us to take advantage of that.

"I have seen Lurgan Celtic and Knockbreda play and they are good teams.

"But the expectations of our fans have risen because they know the two teams standing in our way of a quarter-final place are from the league below us."

Lurgan Celtic are currently third in Championship Two while Knockbreda are four points clear at the top.

Larne, five times cup finalists, are without top scorer Paul Maguire - who has 15 goals this season - because of a foot injury sustained in the first meeting with Celtic.

There will be reports from the Larne v Lurgan Celtic cup game on a Sportsound Special on Radio Ulster medium wave on Tuesday from 19:30. The programme also features Donegal Celtic v Linfield and Dungannon Swifts v Ballymena United in the Irish Premiership.