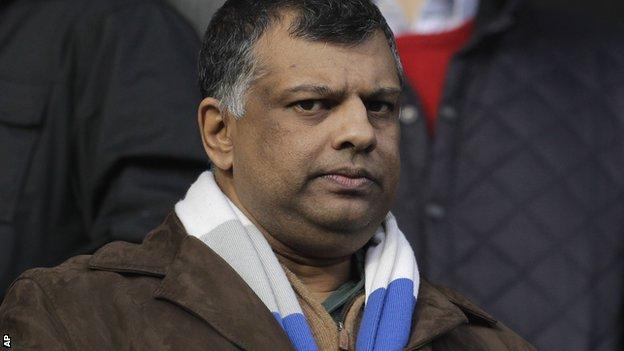 QPR chairman Tony Fernandes says he will leave the club if he cannot "fix" their problems.

The R's are bottom of the Premier League and lost 4-2 at home to League One MK Dons in the FA Cup on Saturday.

Fernandes said on Twitter: "Many fans attacking me. Doing our best. As I said we won't stop trying.

"As I have said many times I take all responsibility and will face the music. Always spirit up. If can't fix it I will be first to go."

The Malaysian businessman took over QPR in August 2011 on their return to the Premier League.

In January 2012 he sacked Neil Warnock, the manager who led them to promotion, with the club sitting one place outside the relegation zone.

His replacement, Mark Hughes, kept them up on the final day of the season.

The former Wales boss was then after the club failed to win any of their opening 12 Premier League games, with a large proportion of his 11 summer signings criticised.

Hughes was replaced by Harry Redknapp, with the former Tottenham boss implying he would not spend much money on transfers in January if they were adrift at the bottom of the table.

However Fernandes then allowed him to break the club record to sign striker Loic Remy from Marseille for £8m, with his wages believed to be £80,000 a week.

Remy missed the Dons defeat with a tight hamstring.