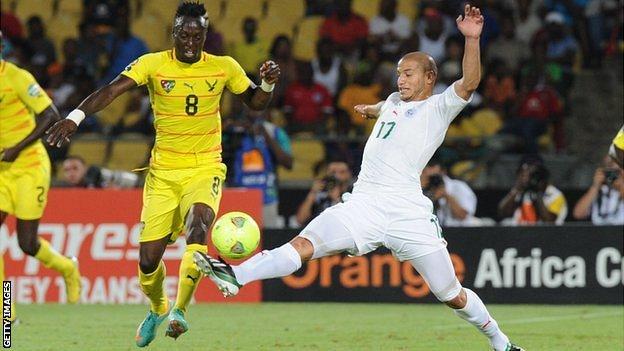 Algeria midfielder Adlene Guedioura insists that drastic changes to the Desert Foxes' team and coaching set-up are not necessary despite their early exit from the Africa Cup of Nations.

Vahid Halilhodzic's side were one of the pre-tournament favourites and are rated as the number two side in Africa.

But they became the first side to be eliminated after a 2-0 loss to Togo.

That result, coupled with their opening 1-0 defeat by Tunisia, means they cannot progress to the knockout stages.

You can't reproach us for our competitiveness, our ambition, our style of play

The North Africans will have nothing to play for in their final group game against Ivory Coast on Wednesday, with the Elephants already through, after their 3-0 win over Tunisia.

Guedioura, however, insists his side remain defiant after their early exit.

"The only thing you can reproach us for is not scoring," Guedioura told BBC Sport.

"You can't reproach us for our competitiveness, our ambition, our style of play.

"I think against Togo we played well again but destiny was just not with us.

"It's very harsh for us because we controlled the game again, we had the majority of possession, we had a lot of chances to score and at the end we lost 2-0."

The Desert Foxes dominated for long periods in both their Group D games, but were left frustrated, after being unable to find the net in either tie.

The former Wolverhampton Wanderers midfielder says, however, that they remain focused on doing everything they can to bow out of the tournament on a high.

"We respect football and we respect our country. We're going to try to beat Ivory Coast," he said.

"It's not good to finish with three defeats, because we deserve more than to lose the first two games.

"We have a lot of young players and we need to look forward to the next matches and the World Cup."