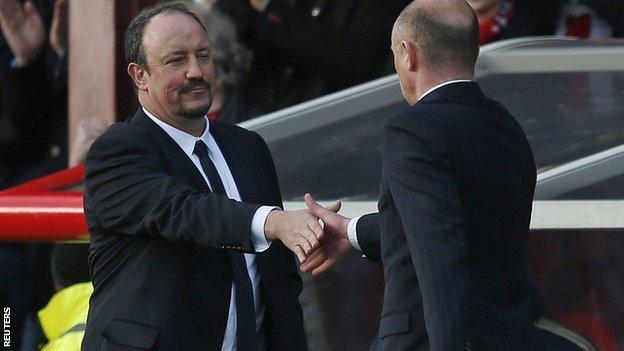 Chelsea's interim manager Rafael Benitez insists he was not affected by renewed hostility from the club's supporters in the FA Cup fourth round draw at League One Brentford.

Fernando Torres rescued Chelsea from the humiliation of an FA Cup exit after their midweek Capital One Cup semi-final elimination against Swansea City with a late equaliser in the 2-2 draw.

FA Cup holders Chelsea are unbeaten in 25 FA Cup matches (W20, D5), and have lost only one of their last 36 in the regulation 90 minutes

Benitez was the target for loud abuse from Chelsea's angry travelling support as he walked off at half-time with his team 1-0 down - then heard chants of "You Don't Know What You're Doing" when he sent on defender Cesar Azpilicueta ahead of striker Demba Ba with his side 2-1 down.

"I have said before that I am just concentrating on my job. I try to stay really focused and I can guarantee Juan Mata changed the game when he came on," he said.

"The club said they wanted a manager with experience and I will try to do my job."

Benitez does not expect to make any more signings before Thursday's transfer deadline and insisted he believes Eden Hazard's three-game ban for the incident involving a ball boy at Swansea City is sufficient.

He said: "In the first half we didn't do what we had to do. We made too many mistakes, but I was really pleased with the reaction of the team after that. We showed quality and character."

Chelsea appeared to be denied a clear penalty in stoppage time when Harlee Dean handled Mata's shot and Benitez said: "We were really disappointed with that not being given.

Brentford manager Uwe Rosler admitted his team were fortunate to escape a penalty award, saying: "We deserved that bit of luck. Harlee Dean did handle but the hand was at a very close distance. There is some football god up there.

"I'm slightly disappointed we didn't win but overall my players did fantastic and deserve a lot of praise. They have earned the right to play at Stamford Bridge. Individually and collectively they were top drawer."

Rosler also clearly thought Chelsea keeper Ross Turnbull was fortunate to only receive a yellow card when he pulled down Tom Adeyemi.

The Brentford boss said: "It was a goalscoring opportunity that was denied and we all know what that means."