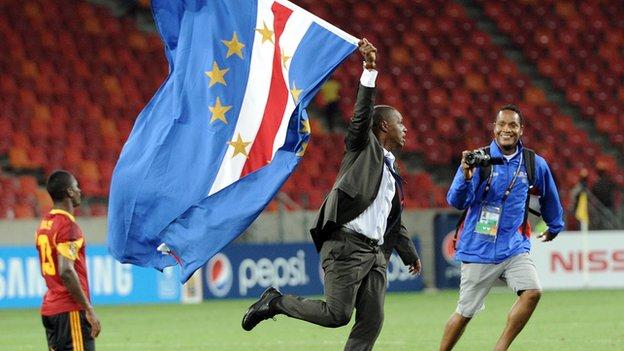 Coach Lucio Antunes dedicated Cape Verde's historic passage to the Africa Cup of Nations quarter-finals to the inhabitants of his homeland.

The debutants' fairytale run continued when beating Angola 2-1 on Sunday to qualify from Group A.

"My team and I dedicate this victory to the wonderful people of Cape Verde," said Antunes.

"Our objective at this tournament has been achieved. We wanted to reach the quarter-finals."

Our qualification is crazy

Cape Verde, a nation of ten islands located off the west coast of Africa, were trailing 1-0 with just nine minutes of their final Group A tie left in Port Elizabeth.

But the smallest country to ever compete at the Nations Cup staged a dramatic turnaround, with late goals from Gege and Heldon, to spark celebrations among the half a million inhabitants back home.

South Africa's late equaliser against Morocco, with the match in Durban ending 2-2, also enabled Cape Verde to finish above the North Africans in the table.

"Our qualification is crazy. This is the first time we have come to the tournament and we've qualified so this is a dream right now," midfielder Guy Ramos told BBC Sport.

Nicknamed the Blue Sharks, the entire squad burst into the post-match news conference to sing and dance in front of reporters - with Antunes himself wrapped in a Cape Verde flag.

Antunes, who is working as Cape Verde's coach after taking time off from his regular work as an air traffic controller, also chose to sang at the same news conference.

Stopping talking, he broke into a few bars of 'The Biography of a Crioulo', a Cape Verde song of joy referring to the Portuguese dialect spoken in the islands.

"It is a traditional song. I dedicate it to all the people at home," he said.

"We came here with the determination to win this game and from the first minute we worked. It was the dedication of the players."

"We knew what was happening in the other match between South Africa and Morocco and that's why I told the team to attack until the end and it paid off."

Cape Verde will now meet the winner of Group B in their quarter-final in Port Elizabeth on Saturday.

All four teams in the group - which pits leaders Ghana against Niger, and DR Congo against Mali on Tuesday - can still finish top.

Cape Verde had already caused one of the upsets of the 2013 Nations Cup when eliminating four-time champions Cameroon in qualifying.