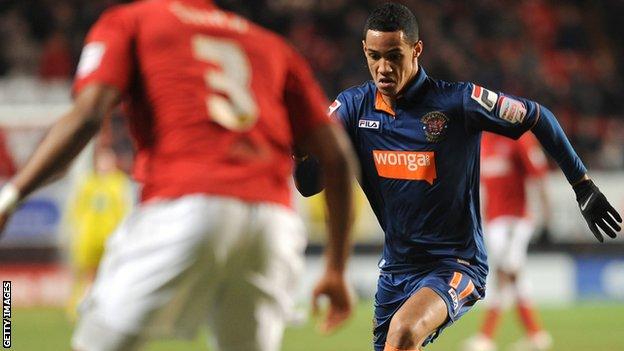 Thomas Ince has said he would be "more than happy" to remain at Blackpool if a move to the Premier League does not materialise by the end of the month.

After scoring twice at Wolves, he told BBC Radio Lancashire: "I'm a Blackpool player right now and I will keep doing what I did for them on Saturday.

"Whatever happens, happens. If not, I'll be more than happy to play for this club and those fans."

And when asked if his appearance in the would be his last for the Seasiders, he replied: "Definitely not."

Ince began his career at Anfield but decided to leave in search of first-team football and joined Blackpool in the summer of 2011.

He scored eight goals last season and has excelled this term, while his brace in the win at Wolves took his tally for the campaign to 15.

Speaking on the BBC's Football Focus programme on Saturday, Ince's father Paul said the Reds were not the only club interested in signing his son.

"People think it's just Liverpool, but there have been offers for Thomas from other clubs," said the former England captain.

"It's all about timing for me. There's no point going to the Premier League if you're not going to play.

"At Blackpool, he's playing week in and week out, he's enjoying his football, and he's still young enough to go to the Premier League."

Ince's goals at Wolves earned Blackpool a first win since 15 December and a first victory since Appleton's departure.

The Championship club are yet to appoint a permanent successor to Appleton, who left to join Blackburn, although Ince believes caretaker boss Steve Thompson deserves a chance at the top job.

"He's been here through thick and thin and he's stuck by these lads," he continued. "All he ever does in training is help the boys. Whatever he does is for the club.

"He has every right to have a go at this job, why not? We've got our full backing for him. All we can keep doing is putting in performances like that, and I'm sure it will do him no harm."