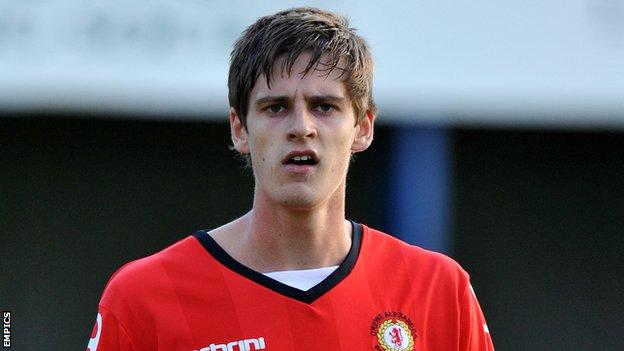 Crewe Alexandra's Jon Guthrie has admitted his full debut in the defeat at Bournemouth came as a surprise.

The 19-year-old was playing for Wessex League Division One side Pewsey Vale less than 12 months ago and joined Crewe in February.

"I haven't been here too long so it was a bit unexpected to start, but overall I'm pleased with how I did," he told BBC Radio Stoke.

"Most of my old village came and it was good to see all their faces."

Guthrie's only previous experience of professional football was as a 90th-minute substitute for Crewe in the 2-1 win over Swindon in October.

But he says that his first start has whet his appetite to play more games.

"It's a bit of a step up to what I'm used to," continued Guthrie, who had a loan spell at Leek last season.

"I was always hoping to get the nod and get the chance to play. Hopefully I've done enough to get put in again.

"I want more of it now, I don't just want one performance. I'm not expecting to play every game week in, week out, but I'm hoping to put something in the gaffer's mind."