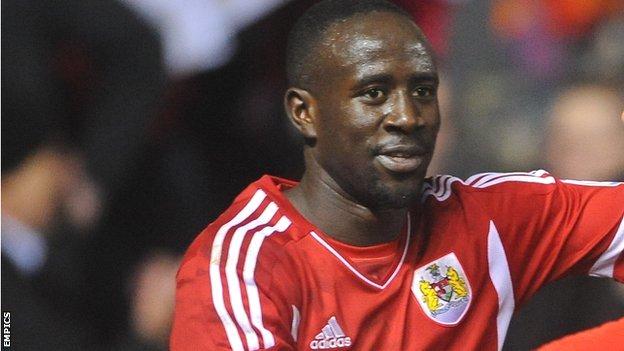 Bristol City head coach Sean O'Driscoll says the club's board will have the final say on the sale of influential winger Albert Adomah.

The Championship side rejected a bid for the 25-year-old last week, believed to be from Crystal Palace.

Adomah, who is currently on international duty with Ghana at the Africa Cup of Nations, is contracted at Ashton Gate until 2014.

"Everybody has a price," O'Driscoll told BBC Radio Bristol.

"I don't think financially we have to sell him - just like I don't think Crystal Palace had to sell [Wilfried] Zaha, but when Manchester United put in £15m then that's good business.

"It's the same with Albert. I'm sure the two clubs will decide whether they can come to some sort of agreement, but that's for the board to decide rather than me."

Bristol City paid a six-figure fee for London-born Adomah in July 2010, and he has gone on to make 121 appearances for the club, scoring 15 goals.

Speaking last week, the player said: "At the moment I'm happy at Bristol City. It's not down to me whether they let me go."

Adomah was the subject of a £3m bid from a Premier League side last season and he has been mooted as a possible replacement for Zaha, who will join Manchester United at the end of the season.