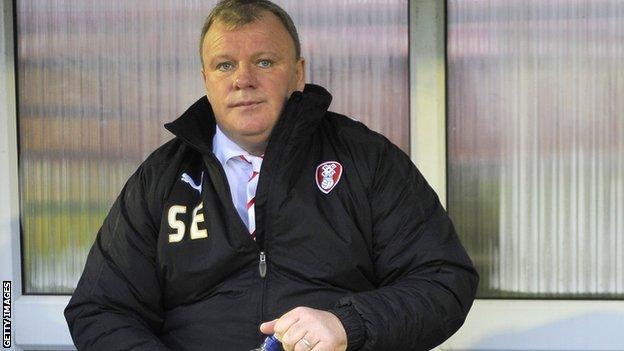 Rotherham boss Steve Evans has urged supporters not to be unduly concerned with the side's poor run of form.

"Let's put this in perspective, if we win our game in hand then we'll go third," Evans told BBC Radio Sheffield.

"We were in a similar run in September and October when things wouldn't fall for us and we changed one or two things and it gave us a spark."

He added: "Anyone who knows me will know that no one will be lower than I am right now.

"It is about how you react and working hard but you can't legislate for the kind of errors we made."

Evans made six changes to the team that lost 2-0 to Barnet in their last League Two fixture.

The former Crawley boss said he would have to analyse the game before deciding the best way forward for his side.

"Some of the changes happened because I had better players available," he continued.

"It's easy to say in the heat of the moment that you want to make changes but you have to watch the game back first.

"I've been guilty in the past of making comments and then feeling differently after I've seen it again."