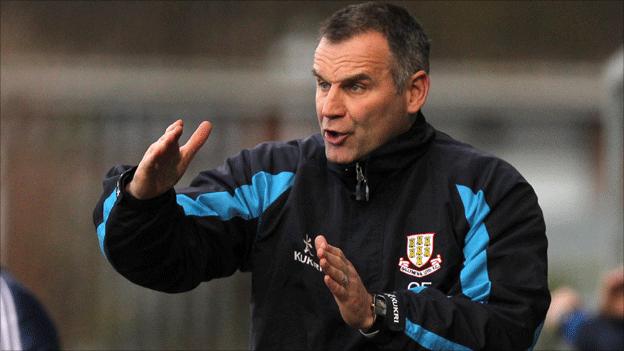 Ballymena United go into Tuesday night's rearranged Premiership game away to Dungannon Swifts boosted by the news that manager Glenn Ferguson has extended his contract by two years.

Ferguson's initial deal was to expire at the end of the 2013-14 season, but the former Linfield striker will now remain at the helm until May, 2016.

United have signed centre-back Shaun Maher until the end of the season.

The 34-year-old has most recently been at Dundalk in a coaching capacity.

Maher will offer the Sky Blues another option in defence as Johnny Taylor, Aaron Stewart and Denver Gage are currently on the injured list.

Ferguson has been in charge at the Showgrounds since the start of 2012 and led the Braidmen to their first silverware success for 23 years with a victory over Linfield in the County Antrim Shield final in November.

Ballymena need a win at Stangmore Park to maintain their hopes of a top-six finish ahead of the league split at the end of March.

Michael McNamee will provide commentary on the Irish Premiership game between Donegal Celtic and Linfield on a Sportsound Special from 19:30 GMT on BBC Radio Ulster medium wave on Tuesday.

He will be joined on commentary by Crusaders manager Stephen Baxter.

Cliftonville boss Tommy Breslin will provide analysis of that game.

Black had been struggling with a toe injury in any case, while manager David Jeffrey will also check on the fitness of striker Mark McAllister, who has been suffering from a rib complaint.

Goalkeeper Alan Blayney is again set to sit out the game with his finger injury.

The Blues lie third in the league standings, 16 points behind leaders Cliftonville, with a match in hand.

DC will hope to put more daylight between themselves and bottom-of-the-table Lisburn Distillery.