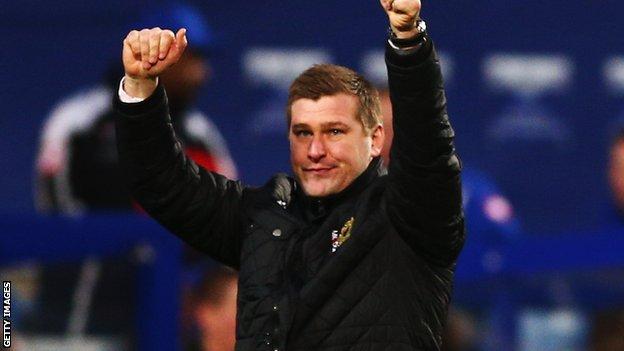 Robinson, whose League One side believes Championship strugglers Barnsley offer an opportunity to progress in the competition.

"I think it's a great draw for us," he told BBC Three Counties Radio.

"It's a tie both clubs and managers will look to win. They'll see it as a winnable tie and so will we."

The Dons, formed in 2004 following Wimbledon's move to Milton Keynes, had never gone further than the third round until this season.

But, after a memorable 4-2 victory over Harry Redknapp's QPR at Loftus Road, MK are one game away from a quarter-final place.

"It's a very evenly-matched game and it's a great opportunity for ourselves or Barnsley to get into the quarter-finals," added Robinson.

"It's the type of draw we were looking for."

Robinson estimates the club's FA Cup run has so far earned them "touching on half a million pounds".

But, despite having loan signings already lined up, he does not expect any extra funds to spend towards his side's promotion push.

"It fills the gaps at the club. There are other areas it may need to go and I understand that," he said.

"There are one or two targets I've got - I may bring [them] in on loan until the end of the season. One's a forward who can play wide and [there's] another wide player."