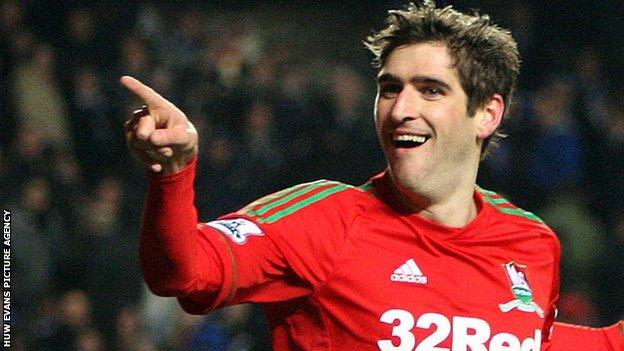 Graham was reported to have asked to leave the Swans for personal reasons on Monday.

But Jenkins has rubbished suggestions Graham, who has been linked with Sunderland and Norwich City, had handed in a transfer request.

"At the moment there is no substance to this whatsoever," said Jenkins.

"If he comes and says he wants to leave and there's a very good offer we'll have to look into it," said Laudrup.

I haven't read anything official ... where Danny has said he wants to leave, that means he must want to stay

"[But] it could easily happen that we have exactly the same squad in February as we have now."

Graham has been eclipsed as Swansea's main striker by the emergence of top scorer Michu, with a large proportion of his 22 appearances coming from the bench.

And he has been linked with a move to Tuesday's opponents, Sunderland.

"We have had some offers for him," confirmed Laudrup.

"[But] I said to you already in December that I want to talk to the players not playing regularly, I've done that."

Laudup hinted that the offer had not met Swansea's valuation for Graham, who has scored seven times this season.

"When there is a bid and if that bid is not even close to what the club wants, then there's nothing to do, even if the player wants to leave, he has to stay," he said.

However, when pressed on whether Graham had asked to leave, Laudrup said he would not discuss private conversations.

"I haven't read anything official or in any newspaper or on television where Danny has said he wants to leave, that means he must want to stay and probably he will," he said.

Swansea have no fresh injury concerns for the trip to Sunderland.

Michel Vorm is likely to return in goal after Gerhard Tremmel started the Capital One Cup meeting with Chelsea, although midfielder Ki Sung-Yueng might not be risked after suffering an ankle knock against the Blues.