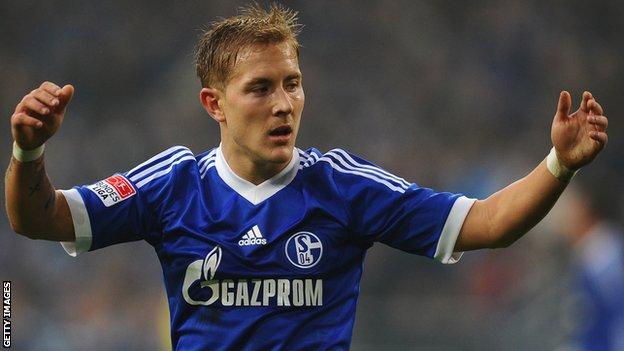 Midfielder Holtby had originally agreed to move to Spurs from the Bundlesliga club in July 2013 on a free transfer.

However, the move has been brought forward with Tottenham paying a fee understood to be £1.5m for the 22-year-old, who is thought to have signed a four-and-a-half-year contract.

Who is Lewis Holtby?

"Tottenham are a top club and I'm fulfilling my dream," said Holtby, who has three senior caps for Germany.

"I have spoken to [Spurs manager] Andre Villas-Boas and I am confident in his plans."

Spurs confirmed the signing on their website, saying: "We're delighted to announce we have reached an agreement for the immediate transfer of Lewis Holtby."

Holtby joined Schalke from German second-tier side Alemannia Aachen in 2009 and made 75 appearances, scoring 11 times.

He was eligible to play for England or Germany because he has a German mother and an English father and opted to represent Germany, the country where he was born.

Holtby has said that as a child he dreamed of playing for England but once he had been selected for the Germany Under-21 side a sense of loyalty meant he continued his journey to their senior team.

"We have found the best solution for all involved," said Schalke director of sport Horst Heldt.

"Lewis had hinted to us that he would not be against moving immediately, and Schalke have received a decent sum for a player whose contract was due to expire in five months."

Holtby's last appearance for Schalke, who are sixth in the Bundesliga, came in Saturday's 0-0 draw at Augsburg.