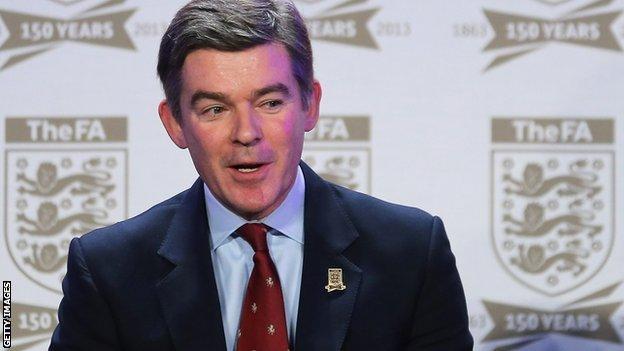 English football has been told it must introduce reforms within a year or the government will impose changes.

The ultimatum appears in a new report from the Commons Culture, Media and Sport Committee.

The MPs' report outlines concerns about financial management, the balance of power between the Premier League and the Football Association and the impact of significant risk-taking by owners.

Much greater reform in football is needed to make the game inclusive, sustainable and driven from the grass roots, where it should be

Robertson, who once described football as "the worst-governed sport in Britain", added: "The report from the House of Commons Culture, Media and Sport committee (CMS) shows the will there is across Parliament for football to modernise and change for the better.

"We have been clear that we want the football authorities to carry out the reforms they promised by the start of the 2013-14 season - most notably around improved governance and diverse representation at the FA, the development of a licensing system and greater financial transparency.

"If football does not deliver then we will look at bringing forward legislation."

The FA, Premier League and Football League responded in a statement: "Significant headway has already been made on many of these proposed reforms, not least on sustainability and transparency.

"The remaining reform proposals are the subject of consultation within the game and we are confident that the necessary progress will be made."

The CMS committee issued its first report in July 2011. The government then responded, identifying three "immediate priorities" for action by football's power-brokers: a complete restructuring of the FA board, the implementation of an FA-administered licensing system for the professional game and significant changes to the make-up and processes of "football's parliament", the FA Council.

"While some progress has been achieved, much greater reform in football is needed to make the game inclusive, sustainable and driven from the grassroots, where it should be," said John Whittingdale MP, chairman of the committee.

"The proposals for reform so far simply don't address the fundamental problems: the licensing model, the way supporters are engaged at club level and the membership of the main board, which is not fully representative or able to balance interests adequately."

Some changes have been introduced, notably through Heather Rabbatts and Roger Devlin joining the FA board as non-executive independent members.

But a series of proposed reforms - billed as "extremely radical" and "progressive" - were rejected by the FA Council last October.

That followed more than a year of negotiations between the FA, the Premier League and the Football League to reach agreement on a joint proposal.

The reforms are believed to have faltered over fears they handed increased powers to the professional game and the FA executive.

The council also rejected a request to allow FA chairman David Bernstein to stay on in office past the automatic retirement age of 70, a decision that Mr Robertson has since described as "crazy."

Bernstein, appointed three years ago, has been praised for his leadership and his efforts to repair international relations following the fallout from England's failed bid to host the 2018 World Cup.

The FA has also, under his tenure, looked to tackle the recurring issue of racism by releasing a discrimination and inclusion action plan.

Today's report reinforces how the FA must now, in the midst of celebrations for its 150th anniversary, appoint a new leader and negotiate with football's stakeholders to introduce the necessary reforms that will ward off government intervention.

Many supporters' groups are also critical that governance of the professional game - and the requirements of any club licence system - would be administered by the FA but with the rules, crucially, left to the leagues to determine.

Establishing a policy on ticket prices, an issue highlighted recently by Manchester City returning 912 tickets to Arsenal after their fans baulked at paying £62 to attend, is just one area over which the FA would cede control under the current proposals.

Greater representation for supporters and tackling issues that concern them such as ownership and effective financial regulation is an issue critics hope can now be tackled.

"The involvement of fans is essential for the future vitality of the game and there is a worrying trend as financial interests take hold that the game is becoming remote from the communities from which the clubs originated," said Labour's shadow minister for sport, Clive Efford MP.

With many clubs facing perilous financial predicaments in recent years the committee also says measures to safeguard their future have not gone far enough.

"The financial proposals were hugely disappointing: the financial risk-taking by clubs is a threat to the sustainability of football as a family and community orientated game, which it should be," said Whittingdale.