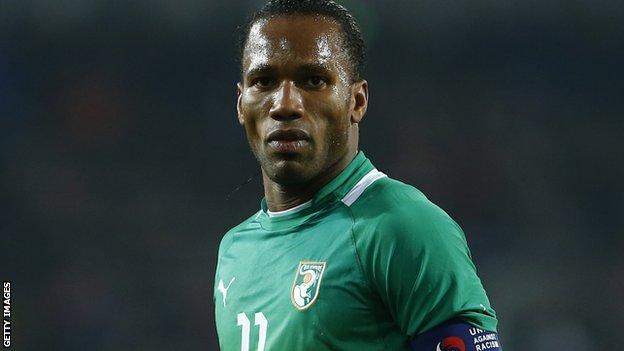 The Turkish club confirmed on their website that Drogba had agreed an 18-month deal.

The 34-year-old is on international duty for Ivory Coast at the Africa Cup of Nations.

Drogba - via his representatives, Sports PR Company, said on Twitter: "I am looking forward to playing in the Champions League again."

Galatasaray are through to the last 16 of the competition, where they face German side FC Schalke 04.

"The opportunity to play for this great club was an offer that I could not turn down," added Drogba.

His representatives said he will join up with the Turkish side once the Africa Cup of Nations is over.

The former Marseille striker left Chelsea last summer after eight years with the Premier League club, helping them to win the Champions League last May in his final game.

He joined Shanghai Shenhua in June and scored eight goals in 11 appearances.

Drogba had initially sought to return to Europe on loan and Chelsea had been in talks over a deal.

However, football world governing body Fifa blocked the move, saying it was against international transfer rules.

Drogba's former Chelsea team-mate Nicolas Anelka could also be leaving Shenhua after having a medical at Juventus.