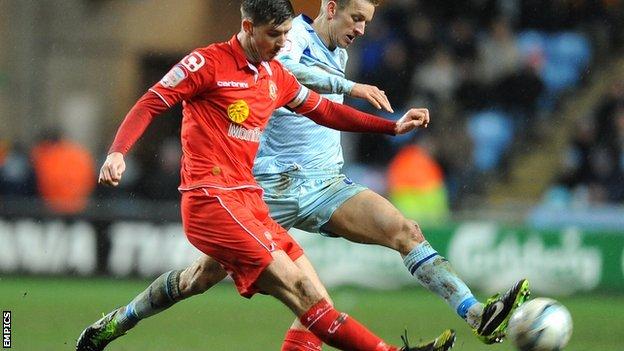 Crewe produced a wonderful away display to take a three-goal advantage into the second leg of their Johnstone's Paint Trophy northern final against Coventry.

The Alex took a 52nd minute lead when Brad Inman struck from inside the box.

Inman then scored a superb second late on when he ran at the defence to fire into the bottom corner before AJ Leitch-Smith curled in the third.

Crewe soaked up a great deal of pressure from the Sky Blues, but will now take a large lead into the home second leg in a fortnight's time with a great chance of reaching the Wembley final on 7 April.

Coventry, handicapped by the loss of keeper Joe Murphy at half-time with a hamstring injury, were unlucky not to get on the scoresheet.

They came close on a number of occasions in the second half as Elliott was again denied by Phillips and Carl Baker struck the post from the edge of the area.

But they could not find the net in front of a near-capacity crowd of 31,054, the highest attendance in the competition outside the final - and the second highest in the Sky Blues' eight seasons at the Ricoh Arena.