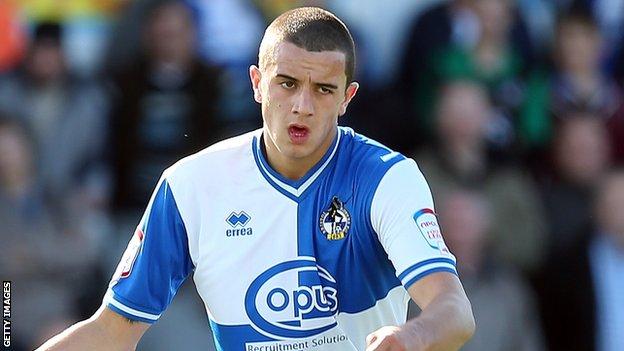 After John-Joe O'Toole forced Robins keeper Scott Brown into a smart save, the hosts went ahead when Shaun Harrad drilled home from 12 yards out.

Steve Mildenhall then saved from Jermaine McGlashan to prevent the hosts from extending their lead.

And with seconds remaining, Norburn's fantastic 35-yard effort gave his side a share of the spoils.

"Credit to them [Bristol Rovers], they played really well, made it tough for us, worked hard and showed spirit - but for me that game was won.

But it's poor defending. Everyone was behind the ball almost and he's hit it from 35 yards. They deserved a point, but they shouldn't have got it. We should have won the game, we should have seen it out. Obviously I'm disappointed."

"Right now I must be the most dejected man in the world, conceding in the 94th minute, but it could be a good point."

"I know I'm biased, because I am, but we didn't deserve to lose the game.

"We deserved something out of it because we've been positive - we've tried to take the game to a team that I'm pretty sure is going to get automatic promotion.

"They're very strong and they've recruited extremely well in January so for us to come and get a point us a great result."