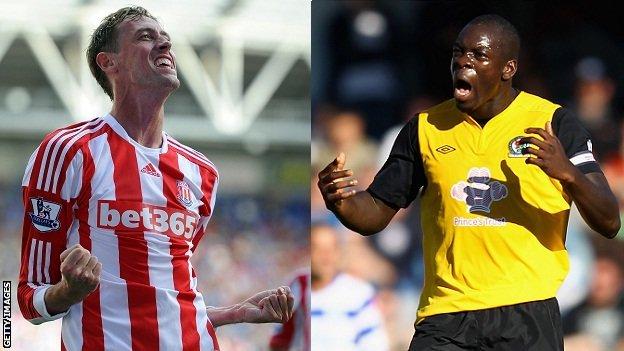 Redknapp is working on several deals ahead of Thursday's transfer deadline - although he admits he is not yet close to signing the pair.

Crouch, 31, played for Redknapp at Southampton, Portsmouth and Tottenham.

Crouch, had a spell at Loftus Road at the start of his career.

Redknapp told BBC Sport: "These are two players whose names have been mentioned but at the moment we're not close to doing anything. Crouch's name came up in a meeting with the chairman but I don't think Stoke want to sell him.

Redknapp also confirmed he is attending an appeal on Tuesday in the hope of attaining a work permit for South Korea left-back Yun-Suk Young, who plays in his homeland for Chunnam Dragons.

QPR, who play Manchester City at home on Tuesday, are bottom of the Premier League, five points from 17th-place Aston Villa. Redknapp took over from Mark Hughes in November with the team without a win in the first 12 games of the league season.

Earlier this month he

A £6.6m deal for fellow France international Yann M'Vila from Rennes broke down when the midfielder signed for Russian club Rubin Kazan for £9.6m.