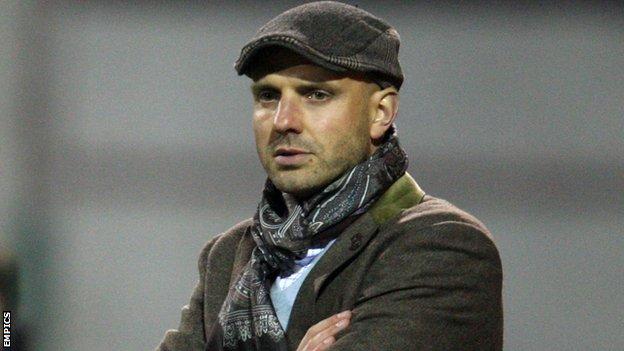 Exeter City manager Paul Tisdale says his side's poor home form is due to a lack of composure at St James Park.

City went down on Monday night, their seventh home loss in 15 games this season.

Exeter are fourth in League Two by virtue of their excellent record of nine wins from 14 games on the road.

"There's a clear difference in the urgency at home, we're too urgent, the players can feel the urgency from the supporters," he told BBC Radio Devon.

"Away from home we relax and play and have a lot more composure and are a lot more patient.

"The only criticism I have of the players is we didn't take enough passes, didn't slow down enough, didn't take our time and we were too urgent to go forward.

"It's not about charging forward, it s about constructive, pragmatic play and away from home we play far more pragmatically.

"They have to play their game and not get caught up in what 4000 people are feeling."

Tisdale's side did pressure Torquay for much of the second half after he brought on strikers Jamie Cureton and Guillem Bauza.

The Grecians forced 14 second-half corners and had eight shots on target.

"We certainly did enough in the game to get at least a draw," he said.

"There are one or two things more I would have wanted form the players, but on the whole I think they did pretty well and definitely deserved an equaliser."