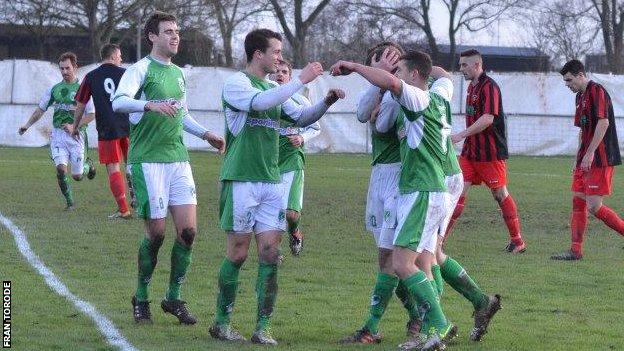 Guernsey FC have lost their grip on the Combined Counties League's Premier Challenge Cup after a weakened side were defeated 2-0 at Epsom and Ewell.

Charlie Pinsard, Naro Zimmerman, Sam Hall and Jonny Coates all made their debuts for the Green Lions.

Only Matt Loaring, Alex Le Prevost and Jamie Dodd survived from the side which

Kyle Hough gave Epsom a 63rd minute lead and then got a second 15 minutes from time to knock the champions out.

It's disappointing as it's a cup we won last year, but maybe from a fixtures pile-up point of view it might help us out

Despite the loss, Guernsey boss Tony Vance said that he felt the new faces in his side acquitted themselves well.

"They didn't let themselves down and the senior lads in the team helped them through it as well, so there were some positives to take from that," he told BBC Guernsey.

"I guess it's up to them now to see if they can push on from here."

They are already through to the last 16 of the FA Vase and will play Spalding United on 9 February after they beat Ely City 2-1 on Tuesday, and Guernsey still have 26 league games to fit in between now and the end of the season.

"We're out of a cup - it's disappointing as it's a cup we won last year, but maybe from a fixtures pile-up point of view it might help us out," continued Vance.

"We've got an awful lot of games coming up and we're pretty thin on the ground, so these boys will continue training and I'm sure they got the buzz from being involved.

"If they've got anything about them they'll want to push on and I'm sure they will."