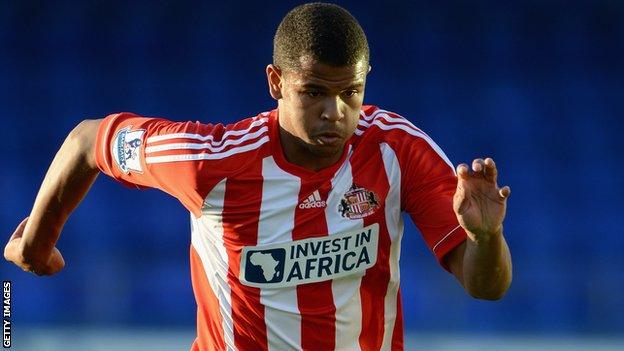 Mackay had been keen to bolster his strike force and signed Campbell for a fee close to £650,000.

Under Mackay's guidance, Cardiff have opened up a 10-point gap at the top of the Championship table.

"That's the most important thing - getting a good relationship with the manager," said 25-year-old Campbell.

"Someone who is well respected by his players and the gaffer [Mackay] has got that.

"And the team is doing brilliantly in the league. They don't really need any more players but if I can come in and push that extra bit over the line."

Campbell is looking for regular football after being plagued by knee problems since making a £3.5m move from Manchester United to Sunderland in 2009.

He required knee surgery on a cruciate ligament problem in April 2009.

Campbell, who has experience of promotion from the Championship while on loan to Hull City, is hoping he can play regularly for Cardiff as well as getting advice from Craig Bellamy, another player who has had knee injuries.

"I need to be playing some football," admitted Campbell, who has scored just once in 15 appearances for the Black Cats this season.

"This is a great chance for me. I've been injured for a long time. I've had a slow start getting back into it but hopefully I can now get some games under my belt and get to the best I can be.

"I've been training back for over a year now. It's not a problem you have to keep on top of it.

"Some of the players like Craig Bellamy have had knee problems in the past and he is managing to keep on top of it."

"[He is] someone who has been through similar sort of things to yourself can always can always help you move on.

"I enjoy scoring goals, hopefully I've not forgotten how to do it. I'm always confident. As long as the team's playing well I'm sure I'll get my fair share of chances."

Campbell could make his Bluebirds debut on Saturday, when Cardiff face a tricky trip to Leeds United.