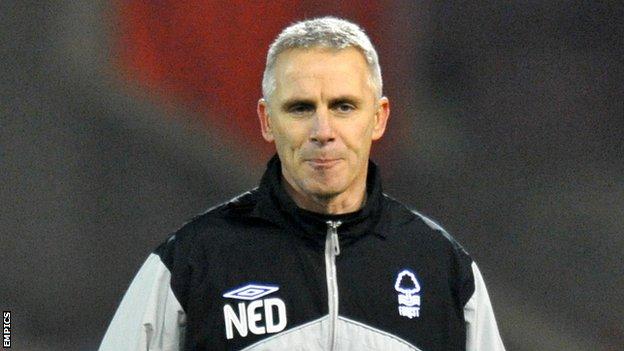 Walsall have appointed ex-player David Kelly as assistant manager on a short-term deal until the end of the season.

The 47-year-old scored 63 goals in 147 games for the Saddlers during a seven-year playing spell at the club.

And he has returned to replace Richard O'Kelly, who left to join Sean O'Driscoll at Championship side Bristol City, as Dean Smith's assistant.

"He's a bubbly character who has a lot of coaching experience, knowledge and contacts," Smith told the club site.

"He was one of the four names that came into my head straight away upon Richard's departure.

Walsall was the club that set me on my way in the professional game and I am grateful for that. Now I want to play my part in helping to shape the club's future

"He is still a well-respected figure at the club for his achievements as a player, and his return is sure to give the supporters a lift."

Kelly joined Walsall as a youngster in 1981, turned professional in 1983, and scored a hat-trick in the play-off final replay against Bristol City to earn the Saddlers promotion to the second tier of English football in 1988.

He earned his first cap for the Republic of Ireland national in the same year, and made a £600,000 move to West Ham.

He left the Hammers in 1990 and went on to enjoy playing spells at nine other clubs including Newcastle, Wolves and Sunderland, before retiring from the game in 2002.

He then made the move into coaching at Preston, Derby and Nottingham Forest, working with Billy Davies, whom he played under at Motherwell.

He left Forest in 2011, and has now gone back to the club he first joined 22 years ago.

"The supporters here will accept you if you do your best and work hard for the badge," Kelly said. "It is something that I'd like to think I did as a player and will be doing as assistant manager.

"I feel privileged to be back here. Walsall was the club that set me on my way in the professional game and I am grateful for that. Now I want to play my part in helping to shape the club's future."