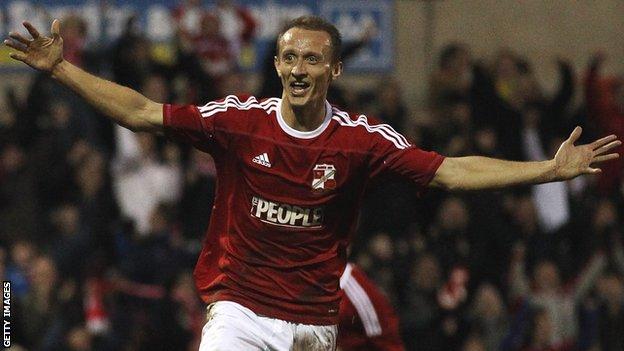 Swindon Town striker Paul Benson has completed a loan move to Cheltenham for the rest of the season.

Robins manager Mark Yates appeared to accept earlier this month that despite their interest, the 33-year-old would not be joining them.

The deal was revived after Swindon boss Paolo Di Canio made it clear Benson was no longer in his plans.

"Patience has paid off and we have been greatly rewarded," Yates told the Cheltenham website.

Benson was a regular in Di Canio's League Two title-winning squad last season, scoring 13 goals in 29 appearances, but has fallen out of favour this term.

He was loaned to Portsmouth for two months in November and although the Benson wanted to stay at Fratton Park, he was denied a loan extension by his parent club because Pompey were not able to match their valuation of the former Dagenham & Redbridge man.

"We would have liked to have done things sooner, but it was important for Paul to think about things and decide on whether it was the best move for him, " added Yates.

"We are happy to have brought a quality player into the club such as Paul."