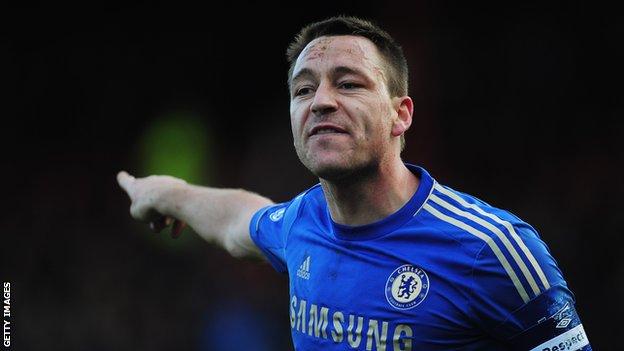 Third-placed Chelsea are 11 points behind Premier League leaders Manchester United but seven ahead of Everton in fifth.

The Blues avoided an FA Cup upset on Sunday as they drew 2-2 at Brentford, with Terry starting his first game since injuring his knee in November.

"Champions League football is a must next season," said Terry.

"We need to liven up a bit and realise the importance to the fans and the club."

Terry's start at Brentford was only his 11th of the season after serving a four-match ban earlier in the campaign before he was injured on his return from suspension in the 1-1 draw with Liverpool on 11 November.

While the defender was happy with his return on a personal level, the performance against the Bees left him disappointed.

The draw also means the FA Cup holders will have a fourth-round replay to contend with next month, adding to an already busy February schedule.

Chelsea have home and away fixtures against Sparta Prague in the Europa League, as well as three Premier League games.

Terry added: "Even though it's great to be back personally, on a team performance we should be winning the game and now we've made it difficult for ourselves with a replay again.

"We have another game we could do without but we should beat them at Stamford Bridge. I was disappointed because we didn't fight and they wanted it more.

"We saw last season, going to the Champions League final, suffering with all the extra games and stuff like that, we ended up finishing sixth in the League.

"It's difficult but we have a squad and it's down to the players who come in to rotate and play well."

Rotating the players he currently has at his disposal is something Chelsea interim manager Rafael Benitez will have to contend with.

The Spaniard signed Demba Ba from Newcastle earlier this month and he says that is likely to be the club's only activity in January.

Asked if he anticipated any movement before Thursday's deadline, Benitez said: "I don't think so but my job is to improve my squad and manage the situation we have."