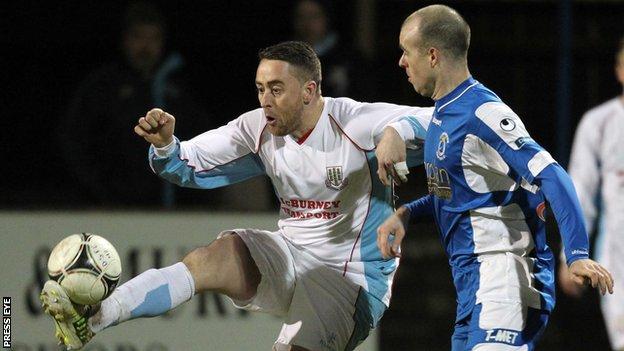 Dungannon Swifts drew for the 10th time in the Irish Premiership this season when their game with Ballymena United at Stangmore ended in stalemate.

Ballymena made a bright start and struck the Swifts crossbar twice inside the first three minutes through Gary Liggett and Gary Thompson.

In the second half, United's Allan Jenkins scooped a good chance over the bar while a Tony Kane shot was saved.

"The positive thing was coming away from home and keeping a clean sheet - but we are disappointed," said Ballymena manager Glenn Ferguson.

"Their keeper was certainly the busier.

"It is tough, but we are not giving up on pushing for a top six finish in the league."

Dungannon boss Darren Murphy said: "Ballymena started well and hit the bar twice, then we settled down and had some half chances.

"But we just did not have enough confidence to get into the box and get that goal.

"We were a bit tentative - nobody wanted to take that chance.

"Overall I am pleased - we have taken seven points from nine and that is not easy for club like us in this league."