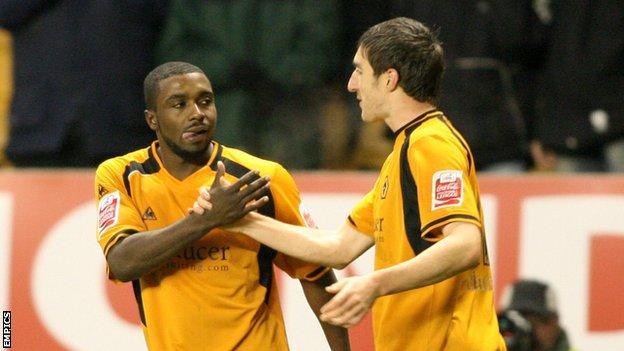 Wolves manager Dean Saunders has confirmed that the club have turned down bids for top scorer Sylvan Ebanks-Blake and defender Stephen Ward.

Striker Ebanks-Blake, 26, is out of contract at the end of the season and has been linked with a move away from Molineux this transfer window.

And Republic of Ireland international Ward, 27, is the only recognised fit left-back at the club.

"We've turned a bid down for Sylvan and Wardy," Saunders told BBC WM.

"The club has shown their intentions and we are not prepared to give our players away.

"Everybody has got their price, but I want to hang onto our players. Sylvan is our top scorer and it's very difficult to find people who score goals in January."

Saunders, who replaced Stale Solbakken at Molineux earlier this month, is yet to claim a first victory since taking over.

And he revealed he has struggled to bring players to the club who sit 18th in the Championship.

"It's not been that easy - there's only a limited number of players," Saunders said.

"Premier League clubs are reluctant to let players go because they can't afford to get relegated and some of them [players] are on wages bigger than we can afford.

"I've only been here two or three weeks and still haven't seen some of them play. Ideally we would like to get a couple of players in and we are trying as we speak."