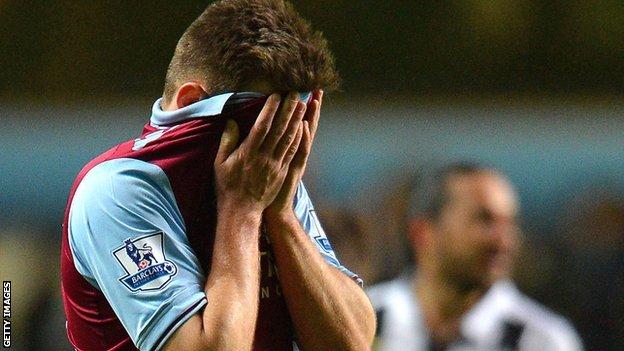 Alan Pardew relished the reward of a night of untroubled sleep while Paul Lambert has enough worries to keep him awake until May.

"I'm looking forward to my bed," said the smiling Newcastle United manager Pardew as he left Villa Park reflecting on the conclusion of some hectic transfer business and a first Premier League away win this season.

No such luxuries for his counterpart Lambert, as their season falls off a cliff after a 2-1 defeat dropped them back into the relegation zone and continued a decline of such proportions you can almost reach out and touch the despair around Aston Villa.

Lambert clutched at the flimsy straw of a gutsy second-half performance that occasionally threatened to rescue an abject first 45 minutes which were bankrupt of quality and ideas.

The Scot even suggested Villa's fans appreciated this belated effort so much that his team received a standing ovation at the end - more of a stooping ovation, as one cynic put it - but you could hardly blame Lambert for attempting to find some shaft of light in the darkness.

And, make no mistake, it is pitch black at Villa Park.

Since beating Liverpool on 15 December, Villa have embarked on a run of "form" that has seen them pick up two points from seven league games. The slide started with an 8-0 defeat at Chelsea and they have lost their last four home games in the league, the most recent three to fellow strugglers Wigan Athletic, Southampton and now Newcastle.

If the first requirement of winning a relegation fight is to beat the teams around you, then Villa are doomed. These are desperate times for this proud old club.

Throw in a Capital One Cup semi-final defeat over two legs against League Two outfit Bradford City and FA Cup fourth round elimination against Championship side Millwall and the picture becomes clear. Aston Villa are only left with a battle to avoid the drop this season - and it is a contest they looked ill-equipped to win.

Lambert was given public backing by owner Randy Lerner this week while Pardew has been offered more tangible support from his paymaster Mike Ashley in the shape of five new French signings this month.

On the evidence presented at Villa Park, words are nowhere near as effective as actions. One team looked stale while the other suddenly looked rejuvenated. No prizes for guessing which was which.

Lambert needs new faces to pep up a Villa side stripped of confidence but offered little in the way of hope that they will arrive.

No such difficulties for Pardew as he admitted a fruitful team bonding meeting at their hotel the night before the game drew laughs amid the French translations designed to help the new arrivals, but also aided the settling-in process.

Newcastle's fans entered into the spirit of entente cordiale with many dressing in berets and hooped T-shirts. There were plenty of sightings of Le Tricolore in the Villa Park stands. One even read "Oui Club" in a light-hearted French response to Manchester United manager Sir Alex Ferguson's recent swipe that Pardew was merely manager of a "wee club" in the north east.

And even more galling for Lambert was the sight of the last new man through the door at Newcastle, Moussa Sissoko, running the game until the shock to the system of the frenetic pace of the Premier League took its toll.

Lambert effectively had his nose pressed up against the window, as the player he wanted to sign but could not afford showed him what he could have had. He said: "You can look at it that way but it was way out of our thing."

As Lambert looked at the tough months ahead with a group of players who look unfit for purpose, Pardew was revelling in the opportunity to manage his increased resources.

Demba Ba may have gone but the Magpies boss was able to introduce Sissoko and Yoan Gouffran, who had a quiet debut, alongside another January signing Mathieu Debuchy.

Debuchy, a star for France against England at Euro 2012, demonstrated enough to suggest Pardew has been handed a bargain, while Sissoko was powerful and imperious until he tired.

Mapou Yanga-Mbiwa played for 11 minutes, long enough to make a fine saving block in a goalmouth scramble, while Massadio Haidara will figure soon. Riches indeed compared to the slim pickings Lambert is currently working with.

Sissoko set up Papiss Cisse's opener while a French import of longer standing, Yohan Cabaye, scored a brilliant second. Christian Benteke's penalty offered a platform for a Villa recovery but they could find no way through Newcastle's defence.

Villa Park, as Lambert rightly said, was in supportive mood at the final whistle, appeased somewhat by the second 45 minutes - but it is easier to play with nothing to lose. When the game started and there was everything to play for, Villa were lost.

Newcastle keeper Tim Krul was busy in the second half but Lambert cannot kid himself because in the first half, one thunderous shot against the post from Charles N'Zogbia apart, he could have sat in the stand with the travelling Toon Army. Villa were that bad.

Lambert has been relieved of any pressure on his job by Lerner's words of backing but all the goodwill in the world will not pay the bills if Villa are relegated and miss out on the cash from the new broadcasting deal which will come next season.

The Scot is a fighter, a message he repeats with regularity in extremis these days, which is fortunate because he and Aston Villa are in a real scrap.

And Lambert must find something within this group of Villa players that has been well concealed in these last few weeks. The alternative is relegation.