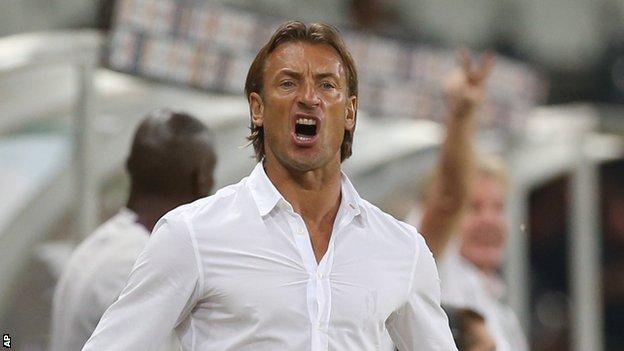 Head coach Herve Renard has said he is to blame for Zambia's failure to reach the 2013 Africa Cup of Nations quarter-finals.

The defending champions were eliminated after a 0-0 draw against Burkina Faso in their final Group C game on Tuesday.

"I loved my team tonight. If there is someone who is responsible then it's me, not my players," said Renard.

While Zambia exited the competition, Burkina Faso celebrated a first second round qualification on foreign soil.

The Chipolopolo claimed a shock tournament victory in last year's event as they beat favourites Ivory Coast in a dramatic penalty shoot-out.

But draws against Ethiopia, Nigeria and the Stallions saw the Super Eagles progress at their expense thanks to a brace of penalties from Victor Moses in their final fixture.

The result ensured Zambia became the first holders to exit the competition at the group stage in 21 years.

"It's better to have won something in your life than always qualify for the quarter-finals, but never win anything," said Frenchman Renard.

"This is not the end of the world. Before we used to go home a lot of times after the first round, and today you have to accept that this is football.

"Everybody is sad but my players did their maximum, and I'm very proud of them. It's not the end of the world."

The stalemate with Zambia owed much to a dogged performance from Burkina Faso as they chose to flood the midfield and slow play down, a tactic coach Paul Put acknowledged after the game in colloquial fashion.

"The ingredient for the day was more pepper than salt for the soup," he said.

Burkina Faso - who will now meet the runners up in Group D on Sunday - had only previously reached the last-eight of the competition when they were hosts in 1998, and Put praised his side for making "history" in South Africa.

"I think it's Burkina Faso's biggest achievement because they hosted it one time and then they reached the semi-finals," he said.

"Our first target was to do better than in [more recent] African Cup of Nations, and we had already achieved that by drawing with Nigeria and beating Ethiopia. I think it's history for Burkina Faso."