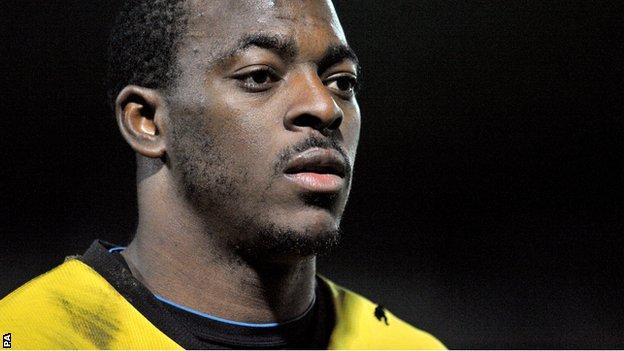 Wrexham goalkeeper Joslain Mayebi has been ruled out for the rest of the season with an Achilles tendon injury.

Mayebi suffered the injury early in the second half of Wrexham's 2-2 draw against Southport.

It was thought at first that Mayebi would be out for eight months but now should be fit for next season.

The Cameroon international suffered a partial rupture of the Achilles tendon, rather than a full rupture as was first feared.

We've got to bring somebody in and we're going to have to use all our networks and our connections and see what we can get.

Mayebi had to complete the gameagainst Southport as Wrexham had no recognised keeper on the bench.

"If you can have good news when you've 'done' your Achilles, it's better than we thought.

"It's probably four months rather than eight and we'll hopefully have him back for pre-season next year.

"It's not good news but it's better news, if you like."

The 26-year-old suffered the injury while clearing a loose back-pass during the Blue Square Square Bet Premier clash, but remained on the field with no goalkeeper among Wrexham's substitutes.

And Mayebi's restricted movement resulted in Andy Owens scoring the equaliser which secured a point for Southport.

The result meant Wrexham missed the chance to return to the top of the Conference Premier, although Morrell was able to sign as goalkeeper cover before the transfer window closed on Thursday.

Maxwell, 22, left The Racecourse in May 2012 on a free transfer after losing his place to Mayebi but has not played for Fleetwood.

"It's amazing how news gets out because I've had all sorts of people thrown at me," Morrell added.

"I know 'Max' has got experience, he's young and I believe he's got a little bit of a point to prove and he's hungry and wants to do well."

Maxwell has been signed on loan until the end of the season.