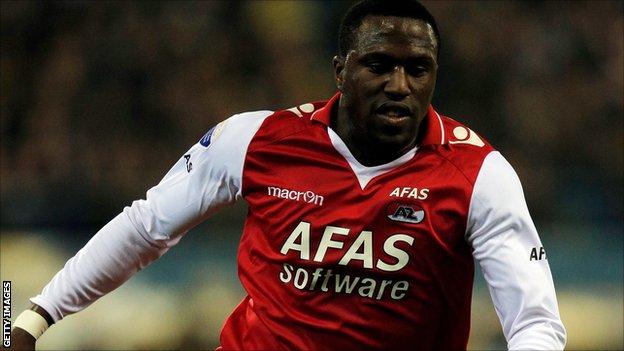 Former Hull striker Jozy Altidore says he will pray for the fans who racially abused him during his Dutch side AZ Alkmaar's 5-0 victory at Den Bosch.

Altidore, 23, who scored one of AZ's goals, was targeted in the first half. The game was stopped by the referee, but Altidore asked for it to continue.

"It's disappointing these things still happen in this time we're in, but what are you going to do?" said Altidore.

"You just hope that these people can improve themselves. You pray for them."

The United States international striker, who has played in several European countries with spells for Villarreal and Xerez in Spain, and Bursaspor in Turkey, said he could not remember facing similar abuse.

"I feel like I have an obligation as a football player, to my club, to my family, to not react to things like this and to show that the club stands better than that, that I was raised better than to respond to such ridiculous behaviour," explained Altidore, who spent the 2009-10 season on loan at Hull from Villarreal.

"It's a bit disappointing. You would hope that we as humanity we can grow from these kind of times but at the end of the day, it's still alive, racism. All we can do is try to educate ourselves, and try to raise young kids to be better than that.

Altidore, who has won more than 50 caps for his country, added: "There's nothing I can do about it. All I can do is pray for them and hope they become better people. I'm not going to fight them. They just have some issues and they need some help."