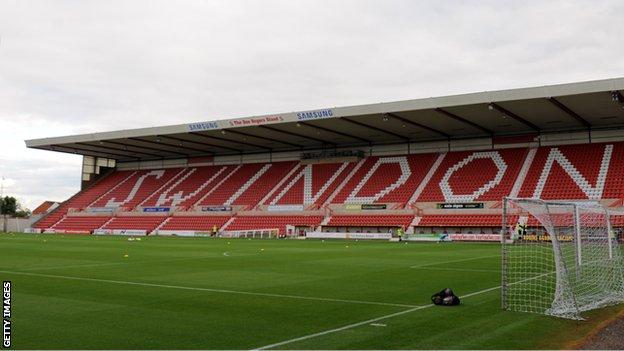 Swindon Town will avoid administration after agreeing a takeover by a local consortium, subject to Football League approval.

The group, who will write off most of the club's £13m debt, is understood to be led by Banbury owner Jed McCrory.

It was revealed earlier this month that Town owner Andrew Black was putting the League One club up for sale because he was no longer willing to invest.

No other names involved in the consortium have yet been revealed.

Owner Black was part of a group - including former chairman Andrew Fitton and businessman Sir Martin Arbib - which took over Swindon in 2008.

Upon their appointment, the consortium paid off a £900,000 bill to Revenue & Customs to effectively save the club from going under.

Fitton was replaced as chairman by Jeremy Wray in 2011, following their relegation to League Two and shortly before the arrival of manager Paolo Di Canio.

The club secured promotion as champions under Di Canio last season and now sit third in League One, but their financial situation has come under scrutiny in recent weeks after Black's decision to sell up.

It was thought around £9m was owed to investors - with total debts amassing £13m - and the club had considered entering administration in a bid to wipe out the unsecured debt.

It is thought meetings have already taken place to discuss whether money will be made available to Di Canio to strengthen his squad before Thursday's transfer deadline.

Speaking last month, the club's current chairman Sir William Patey, who is set to leave his position when the new owners are confirmed, insisted the club had no money to spend on big signings.