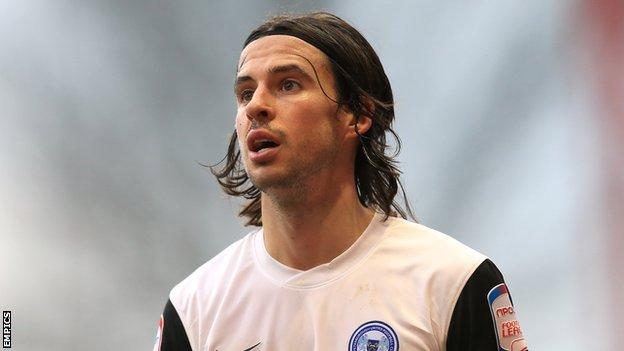 Peterborough United midfielder George Boyd is in talks over a move to Crystal Palace, according to Posh chairman Darragh MacAnthony.

Boyd, 27, is out of contract in the summer and Peterborough are willing to sell him before the January transfer window closes on Thursday.

"We have agreed terms with Crystal Palace for the transfer of George Boyd," MacAnthony said on Twitter.

"The player will now talk terms with Palace," he added.

Boyd has come close to ending his six-year spell at London Road on numerous occasions.

He joined Nottingham Forest on loan at the back end of the 2009-10 campaign, but failed to earn a permanent deal.

And, with Boyd transfer listed after failing to agree terms on a new deal, a deadline-day switch to Ipswich Town this summer fell through when he could not agree a wage package.

He played his youth football at Palace's south London rivals Charlton but made his name in the non-league with Stevenage, before joining Posh in 2007, where he has made 294 appearances, scored 74 goals and been part of three promotion campaigns.

"It's obviously sad news for us at Posh but we couldn't turn this opportunity down for the player," MacAnthony added.

"Many clubs have made bids which in truth were verging on taking the Mick, however CP [Palace] have backed their manager & met our terms.

"George has been a Palace fan all his life and now has a chance if he joins them to help them get promoted to Premier League."