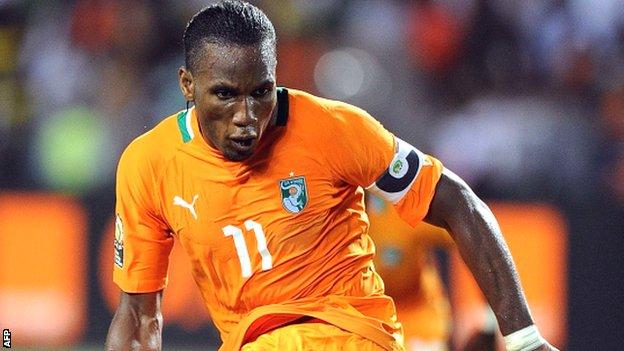 Shanghai Shenhua say Didier Drogba remains their player and that his transfer to Turkish club Galatasaray violates the terms of his contract.

The ex-Chelsea star with the Turkish club on Monday.

"The club is deeply shocked," said Shenhua, who on a two-and-a-half-year deal in June 2012.

"Drogba is still a player of Shanghai Shenhua Football Club. The contract between the two parties is still within the period of validity."

Galatasaray announced Drogba would be joining them immediately after his involvement for Ivory Coast at the Africa Cup of Nations.

Speaking through his representatives Sports PR Company on Twitter, the former Chelsea forward, 34, said: "The opportunity to play for this great club was an offer that I could not turn down.

"I am looking forward to playing in the Champions League again, against the best clubs in Europe."

But Shenhua have disputed the transfer and suggested they are ready to raise the issue with Fifa, world football's governing body.

"We understand that Drogba is eager to participate in the European Champions League," they added in a statement.

"Shanghai Shenhua Football Club and Drogba, on 1 July, 2012, officially signed a formal contract for a period of two-and-a-half years.

"The club has acted in accordance with this contract and has effectively fulfilled the responsibilities and obligations of the club.

"Shanghai Shenhua is prepared to collate all the evidence and information and submit it to Fifa in order to protect its interests."

Drogba opted to play in China after leaving Chelsea following their Champions League triumph in May 2012.

Before the agreement with Galatasaray, he had applied for permission to make a loan move during the Chinese off-season but Fifa refused.