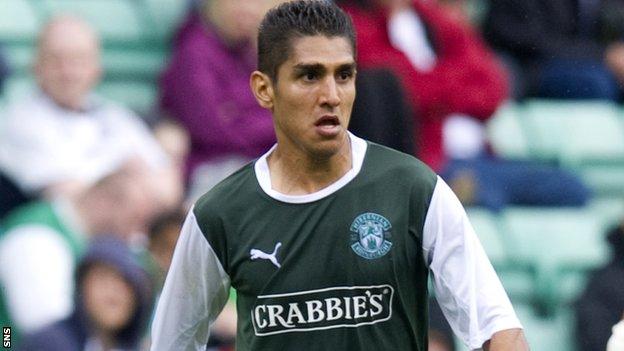 Jorge Claros has agreed an extension to his loan deal that will keep him at Hibernian until the end of the season.

The Honduran international's deal ended this week but his club Motagua have agreed to let him remain in Edinburgh.

He was absent from Hibs' squad for Sunday's 0-0 draw with Aberdeen and manager Pat Fenlon commented that the negotiations had unsettled the player.

Claros will miss the Scottish Cup tie against Aberdeen as he will be on international duty.

The 26-year-old midfielder originally joined Hibs on a year-long deal in January 2012, after failing to reach an agreement during a trial spell with Rangers.

In a statement on the Hibs website, Claros said: "I'm very happy to be staying with Hibs - I've enjoyed my time at the club and believe I've improved as a player.

"My family also feel settled here in Edinburgh and that was a very important factor for me.

"Now the loan deal has been sorted I'm looking forward to helping Hibs enjoy a strong finish to the season."

Hibs manager Pat Fenlon says he is happy to have completed the deal and believes the club has conducted some positive business in January.

"It was always our intention to keep all our loan players at the club, so the fact Jorge is staying is a real positive," said Fenlon.