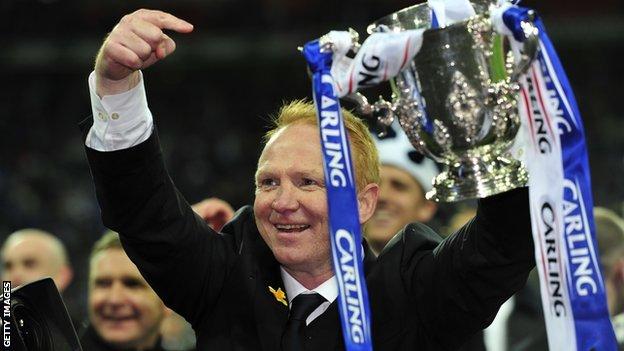 When someone guides a club to their first piece of major silverware in 48 years, you would be forgiven for thinking they would be greeted with a hero's welcome on their return.

However, this may well prove not to be the case come Saturday for Alex McLeish.

The new Nottingham Forest manager returns to Birmingham City, the side he led to Carling Cup victory in 2011, for the first time since leaving his post at St Andrew's to controversially take over at bitter city rivals Aston Villa.

He comes into the game on the back of speculation about his future following rumours he had resigned on Thursday after his because of a failed eye test.

"I would expect the Birmingham fans to probably to give me the bird," McLeish told BBC Radio Nottingham earlier in the day. "But at the same time I am delighted to be back there again.

"I am recharged again and enjoying this job and I hope we can go to St Andrew's and win."

It may seem a distant memory for Blues fans, but it all began so well for the Glaswegian when he left his role as Scotland national manager for the West Midlands in November 2007 to replace the Wigan-bound Steve Bruce.

In his first game in charge, a stunning injury-time winner from Sebastian Larsson against Tottenham at White Hart Lane gave McLeish a nerve-settling victory.

However, this would prove to be a brief moment of joy in McLeish's first campaign, as the Blues could only win four more games for the rest of the season and were relegated to the Championship.

The man known as "Big Eck" was not to be deterred and, after securing automatic promotion back to the Premier League at the first attempt in 2009, by mid-January he had guided his side to achieve a club record 12-game unbeaten run in the first tier of English football.

This is made all the more impressive when you take into account the run came amidst the changes at the club following Carson Yeung's long drawn-out takeover of the club.

The Blues would finish the season comfortably mid-table, and McLeish's role in their success was rewarded with a new three-year contract in September 2010.

Ever since Gil Merrick led his side to League Cup victory in a second city derby final against Villa in 1963, the last and only time they had lifted a major trophy, Blues fans had been craving another to sit in the St Andrew's cabinet.

And in February 2011, McLeish delivered it.

Goals from Nikola Zigic and Obafemi Martins gave Birmingham a 2-1 victory over Arsenal at Wembley in the Carling Cup final to end their trophy drought.

"It was a momentous victory against a really slick Arsenal team," said McLeish almost two years on from the victory. "It was one of the greatest achievements in my career."

However, the feel-good feeling around the club would not last, as they won only two of their last 12 league games and were relegated from the Premier League on the final day of the season after defeat at Tottenham, the place of such ecstasy at the beginning of McLeish's reign.

With the club preparing for Championship football, McLeish then made the stunning call to resign from his post, before days later making the controversial, and in some minds unforgiveable, decision to cross the city and become Villa boss.

"If I get a hostile reception then that's fine," McLeish said, as he prepares to return to his former workplace.

"It's the fans' prerogative to do that but my memories of the club are extremely good and the fans were excellent in my time there and I probably could have been at the club a lot longer.

"Circumstances prevented that but I have nothing but happy memories. A lot of my friends are Birmingham fans."

While McLeish struggled to win over the Villa fans, former Newcastle manager Chris Hughton was given the difficult task to replace the Scotsman as Blues boss in June 2011.

Chris Hughton overachieved massively with a squad put together on the cheap, including the likes of Chris Burke, Marlon King and Steven Caldwell, who had actually been brought in by his predecessor. The thrilling Europa League run actually pulled that group together, reaching the play-offs on a thin budget. The financial restrictions on Hughton's successor Lee Clark are even more severe with owner Carson Yeung still awaiting trial in the Far East, seeing him forced to rely on teenage loanees and the youngsters coming through the Blues academy. A lingering takeover saga has seen acting chief executive Peter Pannu turn his back on Gianni Paladini's offer and claim he is in negotiations with a series of potential new owners in China. None of them have come to anything. Staying up will be an achievement, staying solvent would be a bonus, avoiding administration is essential.

But despite the loss of first-team players like Roger Johnson, Craig Gardner and Larsson, Hughton not only led the club into the Europa League group stages in their first European campaign for 50 years, but guided them to the Championship play-offs, where they eventually lost to Blackpool in the semi-finals.

Yeung is yet to face the courts in the Far East, and to make matters worse for Blues fans, acting chief executive Peter Pannu has revealed the club are need of external investment.

Former QPR chairman Gianni Paladini appeared to be the most willing to take the club - currently lying just six points away from the Championship drop zone - off of Yeung's hands in November, but all appears to have gone quiet on this front.

Therefore McLeish, who was sacked by Villa after just a season in charge, returns to a very different St Andrew's to the one he left.

One where the future is uncertain for the club, their players and their supporters.