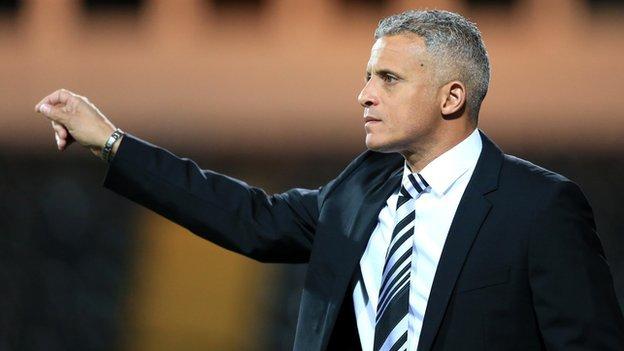 Notts County manager Keith Curle says he wants value for money as he bids for a Championship quality striker on transfer deadline day.

But Curle told BBC Nottingham that he is still hopeful of making a bargain price addition to his squad.

"That shows the type of quality we want to bring in - we want a player with Championship ability," Curle said.

"We were hopeful of getting Jason Scotland, but unfortunately the finances were not correct for both parties and he has gone to Barnsley and scored his first goal in the Championship to help them out."

Magpies chairman Ray Trew has agreed to invest more money despite posting on a fans' messageboard earlier this month that he could not spend more to back their League One promotion push because of salary restrictions.

"At the minute it is not about the amount of money, but about the availability of the money," Curle said.

"I had a conversation with Ray and he said to identify the targets and give them to Jim (chief executive Jim Rodwell) and if there is a financial deal that can be done that fits in the salary, then we will try to do everything to sign them.

"We are mindful when someone is prepared to put their hand in their pocket to give you the money that you are striving for, we are not going to waste it."