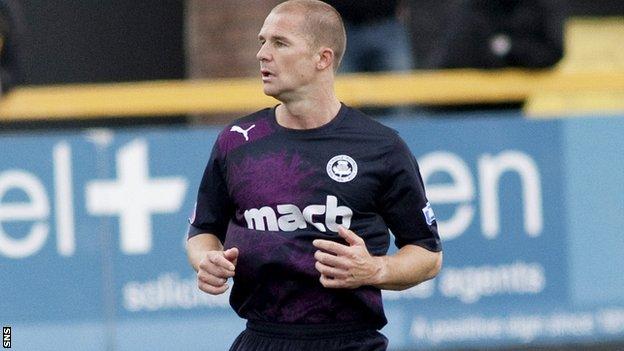 Archibald was in a player-coach role at Firhill and will be assisted by ex-Thistle defender Scott Paterson.

A statement on Thistle's website said: "Working on a day to day basis with the players, Alan has played a pivotal role in our success so far this season.

"The directors feel that his interim appointment will offer the short term continuity required."

Alan has played a pivotal role in our success so far this season.

A former Scotland under-21 international, Archibald was a product of the youth system at Thistle and made his debut against East Fife in 1997.

In 2003, the defender moved to Dundee United where he spent four seasons before returning to Firhill in 2007.

Overall, Archibald has totalled over 400 appearances for Partick and is a cult hero among the fans.

Paterson, a Jags central-defensive partner of Archibald in the past, has had recent coaching experience at Aberdeen and Livingston.

Reflecting on the loss of McNamara to Dundee Utd, Thistle's official statement said:

"Partick Thistle Football Club would like to announce that at 3.45pm today we received letters of resignation from Jackie McNamara and Simon Donnelly which triggered release clauses in their contracts.

"Whilst bitterly disappointed we had no option but to accept this and now need to move on.

"Our ambition at the start of the season was to win promotion to the SPL and that hasn't changed despite recent changes.

"We won't pretend that the last few days have been anything other than difficult.

"The support that we have received this season from our fans though has been nothing short of amazing and Alan, Scott and their players now need your support more than ever."