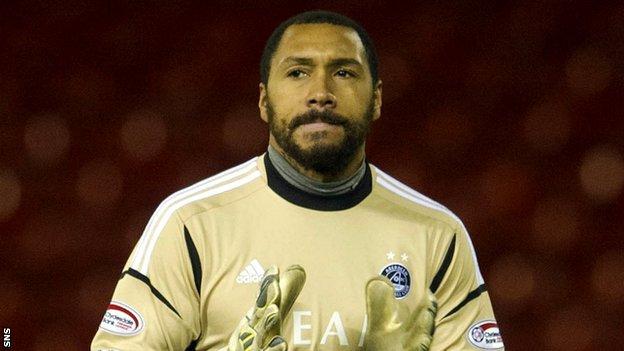 Free agent Jason Brown hopes to find a new club soon in order to get himself back into the Wales squad after leaving Aberdeen.

The Wales international goalkeeper left the Dons after a lack of opportunities.

Brown did not dismiss joining Wrexham with the Blue Square Premier side's goalkeeper Joslain Mayebi out for eight months with an Achilles tendon.

"I won't rule anything out so hopefully the phone starts ringing soon," said Brown.

"Wrexham are obviously doing well in the league which is great. It would be great to have Wrexham back in the Football League.

"It's really sad what's happened to the Wrexham goalkeeper and I hope he gets well soon.

"I want a fresh challenge. I need to put some reconstruction on my career."

Brown, 30, decided to leave Aberdeen after only making two first team appearance this season, admitting it had made him unhappy.

"I just felt it was the right decision because mentally it had taken it's toll on me and affected my family lifestyle.

"I want to enjoy my work again."

He believes if he can get regular football then it will help him get back in the Wales squad. Currently he is behind the likes of Boaz Myhill, Wayne Hennessey and Lewis Price in the goalkeeper [pecking order.

The last of his three caps was in the 2-0 friendly defeat by Mexico in New York - manager Chris Coleman's first game in charge.

"Chris Coleman has been brilliant with me. Playing in the summer against Mexico and playing really well he stuck by me," said Brown.

"And he knew the situation at Aberdeen but he can't justify that to the other goalkeepers.

"I'm 100% confident I can get somewhere and get back playing, that I will be back in the fold.

"I love going away with the boys and I love being involved with my country - there is no bigger honour.

"That's where I want to be. I still feel I've got a hell of a lot to offer there."

"I need to sort out the bread and butter first and the rest will take care of itself."