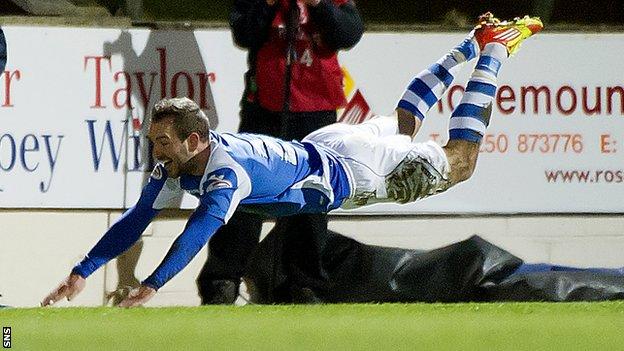 St Johnstone manager Steve Lomas praised the work-rate that helped his side to a Scottish Premier League win over Aberdeen.

Lomas stressed his midfielders were as good defensively as they were going forward.

He said: "It's not second nature to them, they want to attack, get the ball and run at people so there was a lot of unselfish performances.

"It was a super performance and there were a lot of positives."

Northern Irishman Lomas spoke highly of Gregory Tade, who gave Saints the lead by capitalising on a fluffed back-pass by Aberdeen's Isaac Osbourne.

The French striker had spurned an equally good chance minutes before.

"I thought he showed great composure as he could've snatched at it," Lomas said.

"But he didn't, he rounded the keeper and it was a great goal."

Dons forward Niall McGinn struck his 16th goal of the season to level matters by half-time and Lomas wondered how the McDiarmid Park men would respond.

"To concede so close to half-time, you wonder how the boys are going to react to the setback," Lomas said.

"But I thought they responded really well.

"The game was a little bit frantic and the pitch wasn't conducive to great football.

"We brought Michael [Doughty] on at a stage when Aberdeen were maybe over-running us a bit in midfield and he provided a bit of energy."

Fresh energy led to goals minutes later, as Rowan Vine scored a terrific hooked goal and then captain Dave Mackay made it three for Saints soon after - finishing off a well-worked free-kick.

It left Lomas grateful for the quality he has within his small squad, who now sit in fifth place in the SPL.

And he added: "I see them every day. I know what sort of footballers and human beings they are.

"And like I've said continuously, it's a pleasure to work for them. Even when we don't play well it's not for the lack of effort.

"I won't say we're punching above our weight because the chairman will keep telling me off."