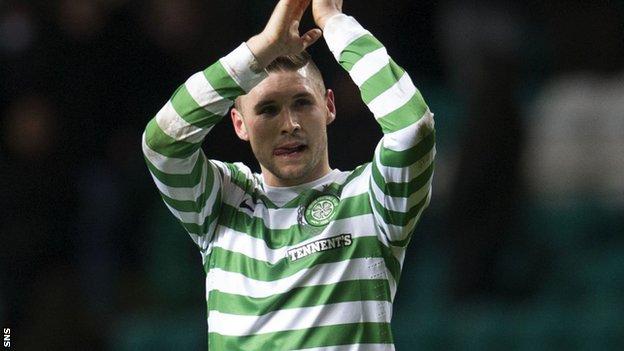 Celtic manager Neil Lennon says the club has turned down another bid for striker Gary Hooper from Norwich City.

Speaking after , Lennon said the latest bid was unsatisfactory after already having turned down two previous offers.

"I think Norwich came in with a third bid yesterday and it was rejected," said Lennon.

"They were well short. We don't have a price on Gary, but the bid that was put in yesterday was well short."

Celtic strode to a comfortable victory at home to Killie following their 3-2 defeat by St Mirren in the League Cup semi-final at Hampden on Sunday.

It takes two teams to make a game, and I wonder if Kilmarnock will be criticised the way we were after their performance

Joe Ledley, Anthony Stokes and a double from Adam Matthews provided the evening's entertainment for the home fans, but Hooper was unable to find the net despite several attempts and a shot that rebounded off the post.

"You can see the way he's playing," said Lennon.

"He did exceptionally well. He wants to be the leading goalscorer, that's his life and what he works hard for every day.

"He just had one of those nights."

Lennon refused to be drawn further on the speculation surrounding Hooper's future, but insisted Celtic were still active in the January transfer market and, if any late deals were possible, they would work hard at bringing players in and holding on to the club's stars.

"All I can say is if a deal can be done, we may get offered players and people may ring up about our players - that's the way transfer deadline day works," said the manager.

"I can't guarantee anything, but what I can say is that all our top players will still be here on Friday."

The Northern Irishman also took a swipe at the journalists who had levelled criticism at Celtic's weekend performance against St Mirren and suggested it was behaviour unique to his own club.

"People expect us to win here," said Lennon. "But off the back of Sunday they showed some great character. I know what I've got in the dressing room, so I'm really pleased with that.

"It takes two teams to make a game, and I wonder if Kilmarnock will be criticised the way we were after their performance.

"Will people feel sorry for their fans to watch their team play like that, or is that just exclusive to us?"