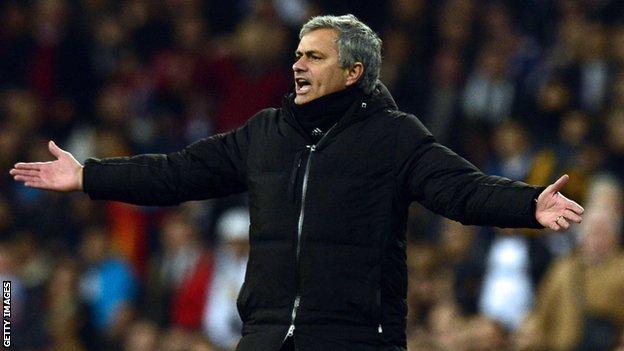 saw his Real Madrid side come from behind to draw the first leg of their Copa del Rey semi-final with rivals Barcelona.

Barca took the lead after a goalless first half at the Bernabeu when Lionel Messi played in Cesc Fabregas, who calmly fired past debutant Diego Lopez.

Cristiano Ronaldo then sent a stooping header just wide as the hosts pushed for an equaliser.

It was the visitors who had come closest to opening the scoring in the first half when Xavi's free-kick hit the bar after 20 minutes.

He had a second chance after a poor backpass by Ricardo Carvalho, but 19-year-old defender Varane rescued his veteran partner by clearing off the line.

The league leaders deservedly went in front, however, when Fabregas fired home after 50 minutes.

Only a brilliant Gerard Pique tackle denied Ronaldo a leveller, but the goal the hosts sought came with nine minutes remaining through former Lens defender Varane.

The second leg is at the Nou Camp on 27 February.

The other semi-final will be contested between Atletico Madrid and Sevilla.